Question about parameters. Specifically the “tuning” on the Vocoder. If it’s not a percentile. And I need to add the +/- 100, what is the command I would use in the object box?

ok, so ‘percentile’ is no different from anything else… its the same as using float, except the units display are %

Does anyone know what the $window-size-$1: not enough arguments supplied means?

unfortunately this is where you need a bit more pd knowledge

so you’ll see in the patch [; window-size 1024;] ,this is actually ‘message’ shorthand for [1024] ->[s window-size]
so thats not going to working, as really you need windows-size-$1 , but if you remember in my ‘conversion’ video, I explained how $1 wont work with messages, (due to syntax) so you need to use send

however, your error i think is coming your changes in hanning window, where you want trying to send the symbol into [pack f s] , so you put this into the first inlet which you have said is a float.

basically you actually want that pack, to feed in two parameter into the message, which should end up being
[;hanning-$2 resize $1;] but frankly this is easier to do with [send]

again, go check my conversion video where I made this change…

I know its all a bit tricky, there are a few pd things which are in play here (hence why I suspected it might trip you up) , its not really anything to do with modules, rather just getting a bit familiar with what is possible with PD messages and what is not… I think thats the bit of ‘missing knowledge’ here, the rest is looking pretty good.

Still no sound. And receiving the error $hanning-$2: not enough arguments supplied

Even though I’m close to pulling out my hair. I’m can definitely tell I’m learning quite a bit.
Anyways, provided more photos below for clarification. 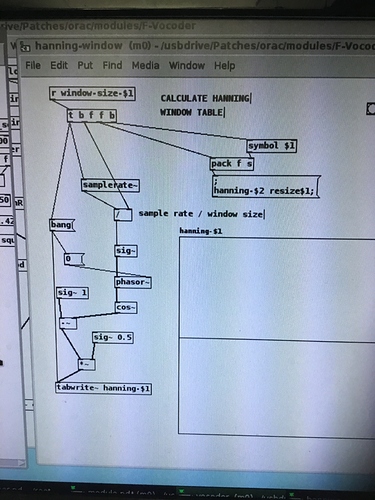 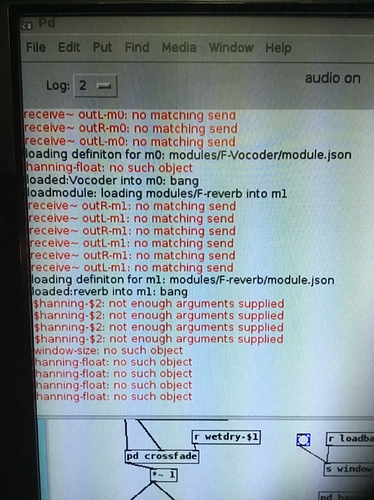 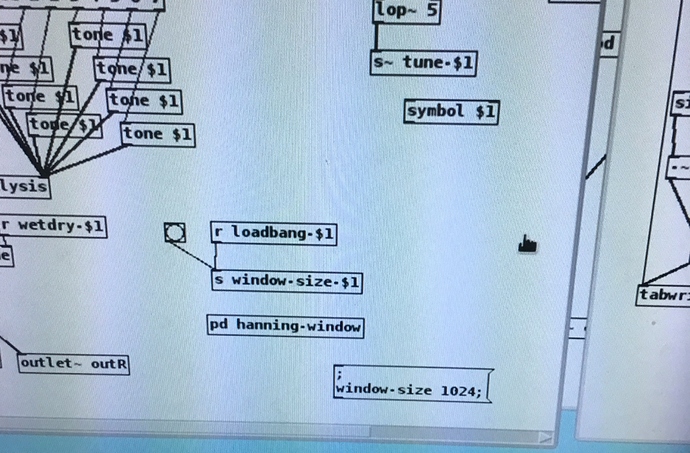 you need a space between resize and $1

Alright, so I tried the space. For some reason I still can’t get sound out of it, and I’m getting this error message.

I think I need to see a new version of module to know where u r, hard to follow screenshots

I understand. I’ll post a new zip tomorrow morning when I get to work.

ok, your issue is, when you switched to using send, you forgot to send in the window size, so you need

with this the hanning window looks correct, not tested the rest of the patch

Just made the change. But still no audio.

I am seeing an error pop up that says
receive~ outR-m0: no matching send
recieve~ ourL-mo: no matching send
It repeats that two more times. Then when I load up F-reverb into the second module that same error comes up. Is that normal?

I’d need to load it up properly to find why no audio, the hanning window looked correct, so could be further up , not studied the patch too much, or changes made.

What I would do is trace the signal path, see where you lose the audio.
(Look at tabwrite~ to see how you can plot graphs of the signal)

Okay, so I changed the audio in’s from [inlet~ inL] and [inlet~ inR] back to [r~ inL] and [r~ inR]. That seemed to do the trick. But I think I may have messed the tone up. when I use the keys to affect the voice it just sounds really off. But still. Progress!

FIXED IT!!! It’s working and good to go!!! Thank you SO MUCH for your help. There is absolutely no way I could have done this without it.

Edit: Spoke to soon. Reloaded it. Sometimes it works sometimes it doesn’t. I’m thinking the issue may be in the “tune” section.

The [pd latch] would only deal with the “latched” notes, correct?
It wouldn’t affect the tone in any way, would it?

Anybody wanna take a look at this and see if they can find out why the keys aren’t working? I’ve been trying to straighten this thing out what feels like a lifetime at this point.

Pd lessons?
maybe a patch converter can be invented or a drag and drop do-hickey.

Pd lessons are definitely something I’ve been considering. Especially since I learn best under a hands on basis.

Honestly, I don’t think the modules are difficult. It’s just my own ineptitude on PD in general that has held me back and caused hiccups.

PD. It looks easy but it’s daunting.
I’ve avoided it myself because I hate getting stumped and then obsessed with a problem and I feel like that’s all I’d encounter when I try and get my hands dirty. Gonna try anyway!

@shreeswifty if by patch converter you mean something that could auto-convert patches to orac modules I think that would be incredible (though I don’t know if possible?). I’m currently scratching my head at why some of the orac S modules sound different to me than the original organelle patches. Anyone have insights I’m all ears.
edit: sorry if this is technically off topic!

Patcher Converter is not really feasible, as it would in places be required to parse the patch to understand its logic - very difficult/impossible.
Even a basic attempt would take more time than I have available.

Sounding different - knob scaling on frequencies is different in places (linear vs squared). Or an issue in translation, again most likely to be around a knob/parameter
I’ll eventually take a look but I’m super busy at the moment, and there’s some higher priority items I’d like to get done for 1.1

Sorry, when I get time I will take a look at this - but … (insert usually excuse)

Pd , like any programming language takes time and practice to get used to, you have to go through fixing bugs etc, so you know what they look like.

All programmers create bugs/ hit issues, it’s just the more experience you have, the quicker you can recognize and fix them.

No shortcut there sorry