So far, I’ve tried a projector and a monitor- both were connected and powered on before starting the Organelle. I do have one other monitor I haven’t tried yet. I’ll give it a go just in case my problems were somehow caused by the first two displays I used.
I’ll report back with any findings.
Thanks!

Hi! When i tried monitor and Tv they both were connected and powered on before starting the Organelle.
Then I know that you have to make a folder called “Modes” with the OTC “patches” inside and this is what i did, but after doing the whole procedure (run OTC installer and only after that run your mother) once I’ve clicked the OTC mother it locks up, the LED goes off but as soon as I move a knob reappears the led only saying “Patches not found …” even if I have the “Modes” folder. In all this, the monitor screen remains black.

I noticed one thing: After I clicked Otc mother once and waited for something to be charged, I disconnected the hdmi cable and brought it back. Only then i saw the screen the ETC logo (like in the picture i sent a week few days ago). But it didn’t move from there

I’ve clicked the OTC mother it locks up, the LED goes off but as soon as I move a knob reappears the led only saying “Patches not found …” even if I have the “Modes” folder. In all this, the monitor screen remains black.

what you should see is:

(so, no you don’t move encoder again)

note: you should also see this, even if you do not have an HDMI cable attached… and this is worth testing,

if you don’t see the above, even when an HDMI is not attached, and you are using a ‘fresh SD card image’, then frankly, I cannot see how it can be anything other than different hardware revisions of the Organelle… as we are all using the same software, and the newer OTC_Installer checks the software, before installing it… so it cannot be corrupted.

hi, i run otc since few days and it s a real pleasure to use this incredible patch! it s like discovering a new universe! thanks to technobear and c&g. i use otc with ableton via midi, but i can t change the midi channel. i turn the channel to 4 on the organelle but the channel on otc stays always at 1, is there a special way to turn the channel on otc?
i ve read the ETC midi chapter and it s written “Additionally, the last MIDI note (pitch 127) is used to toggle that state of the auto clear function, acting in the same manner as each press of the Auto Clear Toggle button. So any note on message with pitch 127 toggles the current state (if it was on, it switches off, and vice versa).” i ve tried to play this last midi note but nothing happens… is this useful option active on otc?

yeah, ETC reads a file called MIDI-Channel.txt for the midi channel, which is different from the Organelle.
I’m probably going to adapt it to use the same channel as configured for PD patches, but not got around to it.

note 127
there is no evidence of that in the ETC code …so perhaps it was intended, when the manual was written, but not implemented?
it would be trivial to add though.
oops wrong, its just in a different place to where I expected it! keymanpal has confirmed its working

I personally think it would be better on a CC though, not a note. as this is consistent with the other controls. 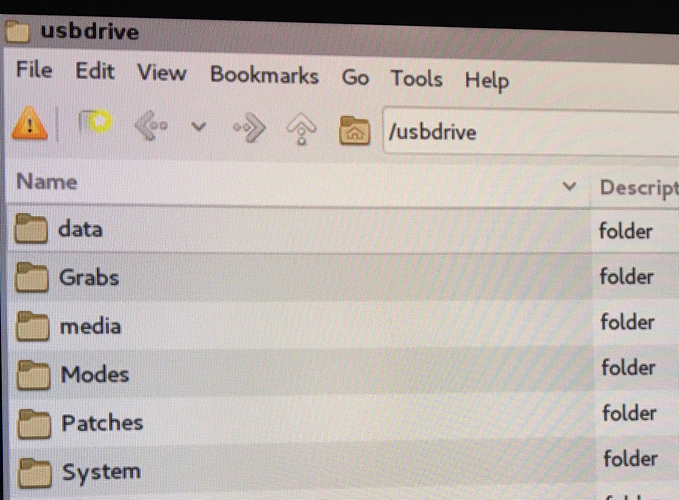 note on message with pitch 127 toggles the current state

I can confirm its working as mention on the ETC manual! (just connected the LinnStrument)
Bringing the OSD I can see it toogles - Clear BG yes/no

I can confirm its working as mention on the ETC manual! (just connected the LinnStrument)

thanks for that, just took another look after you said it works… and found the relevant code.
its rather bizarrely in the ‘etc_system’ code, rather than the midi parser, which is where the midi CCs mapping is done. I think it would be better in the midi parser

yeah, not sure which are necessary, i guess trig ,
I guess also mode? but really program change does that… kind of
program change selects modes, unless there are scenes in which case it changes scene… in fairness, i think the usually, in a performance context, scenes make more sense.
( i need to double check background colour)

i do think that the CCs should also be available for modes to do what they want with too
(perhaps similarly to Organelle, we would then allow the ‘default cc’ to be turned off)

the other thing Ive been considering is implementing ‘takeover’ on the knobs, i don’t really like the jump mechanism… perhaps this could be an ‘option’ though.

another thing i had an idea for was a ‘pause/freeze’ , so you could something like a video stutter effect, or even stop ‘motion’… you could write as a mode, but seems like something that might well work globally.

I’m quite keen to do this now I have the projector, but I do need to first work out where I’m going to mount it… ok, I should have done this before I got it

Hi! this is what’s in it. Is everything right? 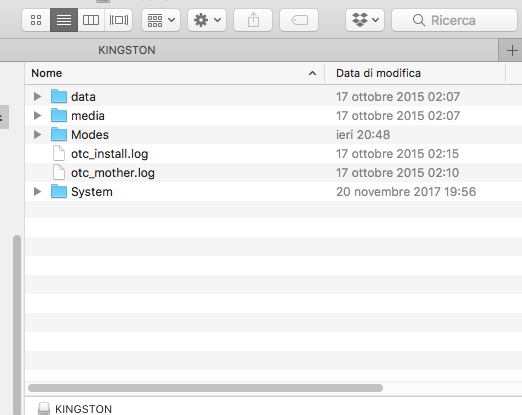 Looks good to me - as long as there are modes IN the Modes folder.

Just bought me a projector too (got it past the wife as it is for family cinema sessions), can’t wait to hook up the OTC!

obviously!
I definitely did some shit but I don’t know where.
I seems to have followed everything as described.

Well… just add a Patches Folder It’s an Organelle so…

No patches found on the main menu, just means you don’t have patches in the /usbdrive/Patches folder…

this is not needed for OTC… however you do need the Modes folder.

Never tried to put patches folder in it. 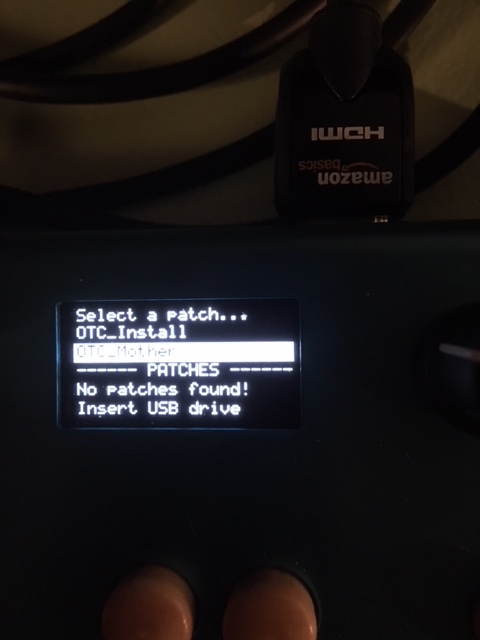 this is not an issue… OTC does not use PD patches.
your issue is lower level, but unfortunately I dont have enough information/diagnostics to determine the underlying cause, and so necessary fix… as far as I can see, for a small percentage of Organelle there is an issue.

btw: did you try to run OTC_Mother without any HDMI connected, did it get further? (as per this post)

btw2: another ‘stupid thing’ to try… try running doing repeatedly (4-5 times), powering off/on, then starting OTC_Mother. as mentioned above, Ive seen some evidence of intermittent failures on my Organelle … though its rare, perhaps for some reason its more frequent on some other Organelle for some unknown reason.

@keymanpal - have you ever had OTC_Mother not start? or has it always started correctly?

Thank you for your answers @keymanpal & @thetechnobear, i think the keystep has the same problem than the akai k25 because i ve tried with the piano roll from ableton and it works!!! and it would be a great thing if modes or scenes would be controlled by cc. “pause/freeze” is also a good idea!!!

Do we mean CC or midi note values? Feel like that would be more appropriate myself. Maybe it’s already there in ETC code for note values, not sure as i’m out the house at the mo.

By the way @oiboy86 you should definitely get some patches on your organelle! Hope you’ve not deprived yourself of musical organelling!

Only notes are available on etc , that’s why I suggested adding cc might be nice extension