Ah, it may have been that I was plugged into the stereo input. I’ll try the mono when I get back home. Thanks again!

So that did the trick, however triggering seems to only progress through a list of Scenes. I can’t get it to trigger on a single Mode. I feel like I’ve tried everything, is there a key stroke I’m not finding or am I simply mistakening how this works?

Edit: I had it plugged into the pedal jack, dumb me. Still turns out none of the inputs can reach the trigger threshold for me, whether I directly line-in or use a pre-amp. It’s responsive to input and the Scopes are affected by input, but nothing can reach the red lines that would trigger a Trigger event.

Did you try a stereo signal, as per my last post

Does a direct line-in with a guitar or microphone not qualify as stereo?

Unlikely, I’d expect this will just use the left channel. ( but depends on cable!)
When using puredata patches do you see the input on both left and right?

Ah, there’s the issue. Left only.

Ah, there’s the issue. Left only.

cool, can you let me know if it works with stereo.

I’ll think about this for OTC 1.6, but not sure when Im going to be doing that, as Ive quite a lot of things ‘on the go’

Any method to force a direct line-in to be stereo in the meantime? If not then what input is typically stereo? Or is this not generally used with audio input and more of a MIDI trigger thing? (I rarely if ever use MIDI for anything).

hi, does otc send midi out? i ve tried to connect my otc on midi but it seems it doesn t send midi out to my daw…

There is Midi in. But I don’t think there is one for midi out (ETC doesn’t have it)… but what kind of data do you want to send do your DAW ?

hi, does otc send midi out? i ve tried to connect my otc on midi but it seems it doesn t send midi out to my daw…

yeah as @TonyLB said, theres no midi output on ETC, so none on OTC…
and Im also not sure why you would want it - Id love to hear suggestions, perhaps it could be added if there is a use-case.

I personally, do no like the way the Organelle sends knobs positions on PD patches, and find myself turning it off all the time, so unlikely I’ll add that to OTC

… id be more likely to add it for some ‘real’ functionality e.g. to sync things for example.

also… thats not to say you have to wait for me, pygame supports midi output, so you can use this directly in your own modes.
https://www.pygame.org/docs/ref/midi.html#pygame.midi.Output

thanks for your answers, in fact i d like to record directly in my daw via midi all the movements i do on the organelle (knobs and keys), like that i could send back the midi clip from the daw to the midi in of the organelle, for live performance it could be really usefull!

hmm, yeah, I can see that in theory, but in practice that feels bit ‘clunky’, as you now need both a daw and the organelle replay the live set.
for example, unless you are creating/driving the audio from your daw as well, none of your otc automation is going to be in sync - so what you recorded beforehand is not going to be the same as what you see live. (e.g. imagine if the transients, and so triggers, were slightly different, your automation will feel out of step!?)

you could kind of do most of this already, by driving OTC from the daw when recording, and using another midi controller to control the daw.
(you only need a few knobs and a keyboard, assuming its all remote controlled, and if its not , it wont work anyway

its interesting though , and its not a way I thought of using OTC…

I guess because I think it of more as ‘reactive’, e.g. ive recently been thinking about driving it via CV (via midi or osc), and being more direct with parameters (I guess like Orac, and midi/modulation learn), as 4 knobs seems quite limiting.

B@thetechnobear I tried loading up OTC after putting some new modules in and it started doing this. It worked perfectly fine before I loaded the new modes. So I know I did something wrong. What information should I send you to help narrow that mistake down?

Also displays this and then goes blank when I first select it. 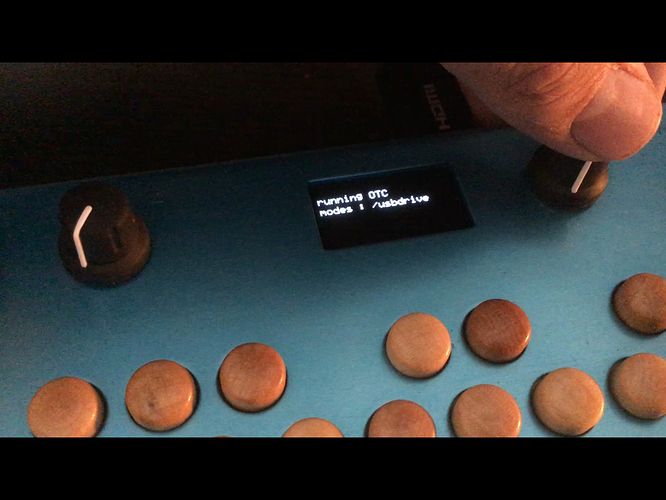 Remove mode that it appears to be having issues with.
Bare in mind, if it’s a mode that loads images, it could be you have too many images, or they are too big as etc loads all images into ram!

I think it could be tricky. As @thetechnobear said, you could have Sync problems.
But if what you want is to control more easily the Otc you Can use à midi controler. I’ve played a dj set with OTC live, sync to the audio and used my novation circuit to switch between modes freely.
Or you Can try to edit modes too…

hi, thanks for your answer, i know it can be done with a controler by control change. for me it was just more usefull not to use an other controler because otc is sync with audio from daw… is it possible to change scenes or modes by control change? i know it s possible to do it by program change but for me it would be more usefull to change different scenes in a single midi clip in ableton…
“I guess because I think it of more as ‘reactive’, e.g. ive recently been thinking about driving it via CV (via midi or osc), and being more direct with parameters (I guess like Orac, and midi/modulation learn), as 4 knobs seems quite limiting.”
what kind of “midi/modulation learn” do you think?

I believe (not checked) mode changes are only by program changes, but id need to confirm in code.
in Live you could use M4L to re-route a CCs to a program change message.

what kind of “midi/modulation learn” do you think?

so for a particular project Im planning, Im considering having a number of parameters (8 obvious ones, but probably more in the end) that will affect the mode - basically the ‘thing’ generating the sound, will also be directly influencing the display e.g. imagine certain voices of the music, moving particular graphical elements in the visuals - obviously this is beyond what 4 knobs can control.
(for this , id likely to do this using OSC, but I could also implement a midi mapping layer)

but for this particular project, the idea is very much the music and visual (modes) being created ‘hand in hand’ … I guess I will decide afterwards if this is something I feel like I want to generalise.

Hi, after a few successful sessions with the OTC I put it away for awhile. Today I tried to load it the OTC and loading screen worked but then I ended up with this screen and couldn’t seem to get any modes to work. Can anyone tell me what this screen would mean as far as how much of OTC was loaded? I thought of remaking the usb and reloading OTC, would that be a good idea for a fix? 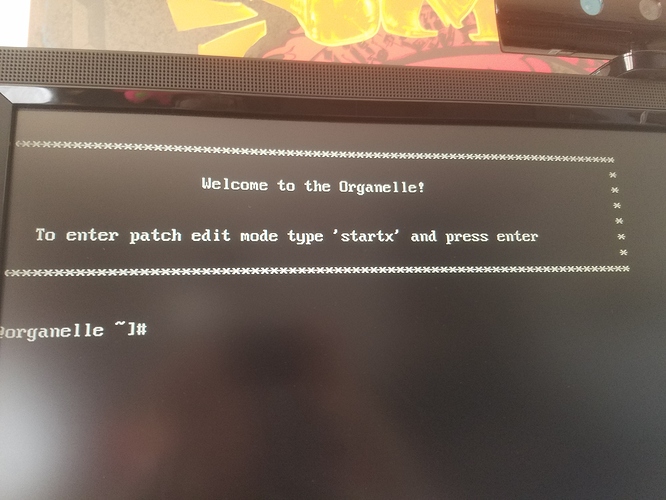 I noticed on the mother.log there were some errors. I don’t really know how to evaluate the log but thought I would look through it and pretend. I found some errors like this. Any thoughts?