I love the Polybeats DRG32v patch, but while using it, I tend to forget where the banks of instruments are. I made this printable overlay to solve that problem. Just print it out (cardstock would work best) and cut out the holes, then place it over your keys.

I don’t have access to a printer for a few days, so I haven’t actually been able to use it yet, but I figured I’d post it for anyone who may find it useful. 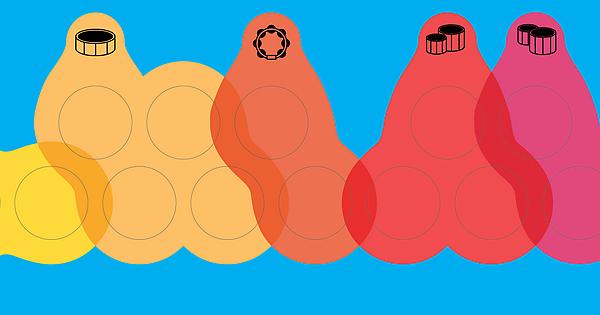 What software did you use to create this? I’d like to have a go at making some at home. Could be really useful for some other patches too!

I used Illustrator. I could share the file when I get home, or just see about making a more neutral, customizable version.

The whole idea with making this was to make the patch more useable in a performance setting. A customizable overlay would be cool for throwing your own samples into this patch.

Precisely my thought! Some patches involve a bit of trial and error with not remembering which keys activate what samples. Not much room for wrong moves in a live setting. Hopefully getting an Octatrack soon and planning to pretty much just use my organelle and that as a live setup, this idea of key overlays would be very useful to swap as you go and also kind of cute.
A ‘blank canvas’ overlay with the same dimensions would be a really useful resource to many i suspect. Brilliant contribution.

Let us know how it goes with the Octatrack and Organelle. I’m in that boat myself but have yet to sync them up or anything. I’d love to hear how you (and others) are using these two together. Separate topic tho…

its funny you did this I was just making something to overlay on the keys too! was thinking about a sticker pack!

In reference to your request for some info on the combo - Octatrack arrived today, not used the Octa for midi trigs on the Organelle yet but had hours of fun sampling sounds from organelle, looping/chopping/and resampling. Feel like its gonna be a match made in heaven!

Awesome! I was trying the cue outs into the organelle which was hella fun. I have a midi to usb cable but I’m liking it being “off the grid” for now.

P.s. Really enjoyed listening to some of your music today, nice dude.