Evening my fellow organelle people.
I’m currently running 3.0 and I’ve noticed a bit of inconsistentcy with saving presets and saving new patches. I unexpectedly became super fond of the “I take up” patch and have made a few copies and while new saves of the patch hold presets from the previous patch fine it seems to want to keep the original samples as well unless I write over them, clearing a sample and shutting down only finds the old sample restored as if pulled from the original patch. I thought the problem might have been patch specific but last night I noticed a “Punchy” copy I’d made also held presets but didn’t save the key sequence I’d made for it to play, it was playing the stock sequence from the original patch instead. So as far as I can tell everything else on my machine works perfectly fine, don’t know if anyone else has experienced the same trouble. It can be a real bummer.
Thanks in advance to anyone who takes the time!

In Pure Data you can select if you want to store the table content or not when reopening a patch. Sounds like it might be turned on in your patches. Anyway, you can check it by right clicking the table and select properties. 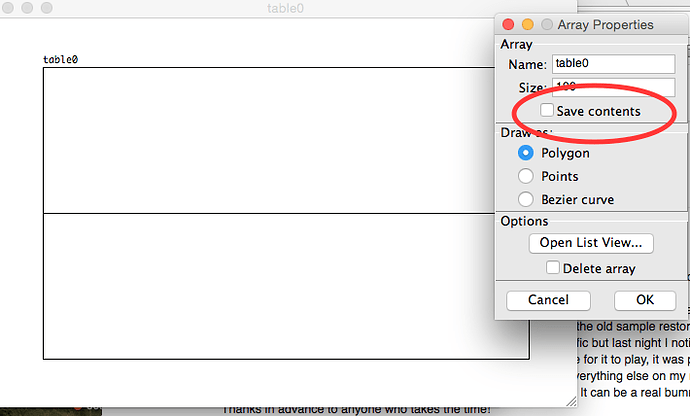 Looks like I’ll finally be taking the Pure Data plunge! haha thank you so much I thought I was going to have to try and code something, a few clicks I think I can manage. Thanks for the help!

I’ve noticed something similar with many user made patches. There seems to be a lot of inconsistency about which parameters (if any) will save when using the “save” or “save new” commands - this is true even in some very popular patches such as Roganelle, for example (@Fuurthur - really enjoying your 16 step patch btw!).

Would it be of any value to start a list here of patches that are highly regarded, but are lacking in save functionality - in the hopes that maybe some PD savvy members of the community might want to update them to work with the organelle’s built in save commands?

Some more on “save” and “save new”
Using samplenest it seems when you “save new” it loads the new patch (samplenest2) but saves your settings to the old one.
On Analog Style “save new” creates a new patch with your settings saved, but if you modify your settings and then “save” it, it will also save those settings to the original patch.
For sure some odd behavior on both C&G and user made patches - I think for people wanting to use and/or make patches that work with the organelle’s built in save commands, clearing this up could be hugely helpful.

Hi @TheDeadFarmer - are you sure about the Analog Style patch behavior?

The ‘Save New’ function creates a new version of the patch (e.g. Analog Style 2) and makes this new version the currently loaded patch. ‘Save New’ leaves the original version intact (…though you could have two identical copies of the patch if you had run the ‘Save’ command and didn’t touch the knobs, create a new sequence, etc. before running ‘Save New’)

The only way you would be overwriting the saved state of the ‘original’ is if you relaunched the original Analog Style before selecting ‘Save’.

Are you running the most up-to-date versions of the patch? organelle.io