Hi folks
I have been super busy this week with meetings and getting ready for some other stuff but i have been sneaking off to work on the HexaTrack when i have had some spare time, but i find that i need some clarity regarding the new knob functions and i am reaching out because i am struggling with how to code one section

I have the Sampling for six separate tracke with pitch, Volume, Playback FWD/BKWD x1/2 speed. 1/4 speed and 1/8 speed and will probably be adding some sort o compression and another effect based on forum feedback as well as midi metronome.

What i want to do:
I want the knob for each of the 6 - 16 step sample play back lanes to be able to step through
1-16 and with a push select and deselect on/off setting for the sample.

i would love some feedback on this from the pd coder folks on here.
finally got to something that has stumped me and i am getting cranky. i have been hollering at the cats all day

only took about 5 hours but i figured out how to address 96 toggles with 16 buttons
With a series of spigots and some conditionals i got it working.
I am one step closer to completing the HexaTrack!

This sounds brilliant. Was beginning to miss your forum posts so figured you must have been busy with something! I’m (selfishly) glad you’re not going for a comprehensive clone.
I’ve been dossing around on the elektron forums for a while and there is a functionality that could push this beyond the capability of the octatrack - probability control for sample playback.

Not sure i this has been shared before, but I just discovered it for myself today. Apologies if it’s already common knowlege. So I’ve been using the OT to sequence a nord rack 2, using a drum kit in one of the slots for freaky electronic drums and...


This or ‘conditional trigs’ are probably the most requested feature from Octatrack users (probably never to be fulfilled by Elektron) as it would allow that machine to break out of it’s solid structure into something more unpredictable. Do you think this is possible with your Hexatrack? 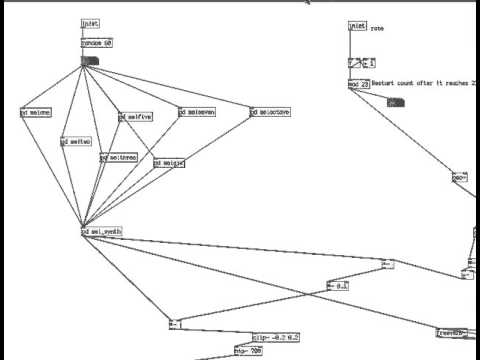 as i posted in another thread i do not think at least from the Novation Circuit that MIDI is stable any longer. /dev/midi3 is showing up but for some patches it’s not recognizing the circuit and i am at a loss for what to do with it. I was about to start employing MIDI on a few patches and i guess we’ll have to wait on that now.

As for conditional triggers i would hav eto actually see some code. Do you have the patch that is shown in the video?

Could @oweno or @chrisk lend a hand here? You have gotten nice functioning midi clock and control into your patches - there is a big demand for Shreeswifty patches from the Organelle user base - perhaps some collaboration on this midi implementation could be beneficial to all.

I’m at work at the mo, but I’ve messaged the uploader of that probability sequencer video and also found a generative midi sequencer for PD https://www.reddit.com/r/puredata/comments/5d42ox/generative_midi_sequencer_for_pure_data/
perhaps each track’s trigs could be dependent upon a probability value defined in this way? https://en.wikipedia.org/wiki/Bernoulli_process
Once again I am asking for something huge and providing nothing, forgive me!

Edit: I wonder if the ‘density’ parameter in grids works in a similar way? http://patchstorage.com/pd-grids/

The probability stuff looks cool, great for the Organelle!

Most of the Organelle factory patches use a ‘master-metronome’ sub patch which handles all clock stuff.

You can set a tempo and it will spit out 24 pulses per quarter note which are then used to derive various other beat divisions. If a MIDI clock source is plugged in, the patch will use MIDI clock instead of the internal metronome. This should all be working the same after the v2.1 update too by the way. Make sure to restart the patch if you have plugged in a new MIDI USB device.

In patches with their own internal bpm object, should the presence of this patch override that clock automatically or must a s-send r-receive system be set up and if so how? I am a true layman and need everything spelled out to me

If a patch has its own method for clocking, then master-metronome won’t do anything. It just sends out 24 pulses and other beat divisions, so any patch that has its own clocking system will have to be adjusted to receive these clocks instead.

@shreeswifty not a copy of the patch but got a comment back from that chap RE: Probability Sequencer.

“A good way to do this is to create a sequencer, have a step in the sequencer bang a random number generator between 0 - 100. Then use the moses object to control your probability. eg. it allows a bang to pass if the number generated in lower than 70. Then you have a 70% probability of triggering an event (like a drum hit for example).This can be done for each step in the sequence so you have a lot of control over the likelihood of a pattern occurring. You can also use it for the likelihood of a certain note playing in a scale. Man I want an organelle!”

That sounds relatively easy to do, let me know how you make out with it!