the MicroSOM is complete, comes with cpu, ram and wifi.

Thanks but how it is going to be used with Organelle? You take out the Micro SOM from Cubox4 and put it into organelle?

I think 150€ is bit high price. If one don’t want this, it is still possible to use the 4 cores right?

You take out the Micro SOM from Cubox4 and put it into organelle?

I think 150€ is bit high price. If one don’t want this, it is still possible to use the 4 cores right?

to get 4 cores, you need to get a new microSOM… and this was the cheapest way I found to get a quad core.

there are other cheaper options. an alternative i considered was a dual core no wifi for 66 euro.
( I thought this was good, but i wanted wifi to free up a usb slot)

theoretically, there are a range of options… including dual or quad core, wifi/no wifi, with or without carrier board.
in particular the options are for Solid Run Hummingbird or CuBox or standalone microSOM.

but, options are also governed by what you can get from suppliers e.g. i dont think i found a good price for dual core with wifi. similarly microSOM only were really expensive, but perhaps a non-european supplier has more options, if you are willing to wait.

anyways, you pays your money and takes your choice (or not

important note: I can only say what worked for me (Cubox i4Pro), any other combination should work, but I don’t know. i.e. there is a risk. in particular, Solid Run current microSOM is v1.5. the Organelle is 1.3 which is now not manufactured. the 1.5 should be compatible (except the wifi!) , however I was ‘lucky’ that the Cubox i4Pro that I got, came with v1.3… but Ive no idea if this is common or if it was ‘old stock’.

(btw: correction on cubox i4pro price , I paid 137 euro inc vat, forgot my order had something else on it)

definitive info is here, you are interested in the iMX6 range. 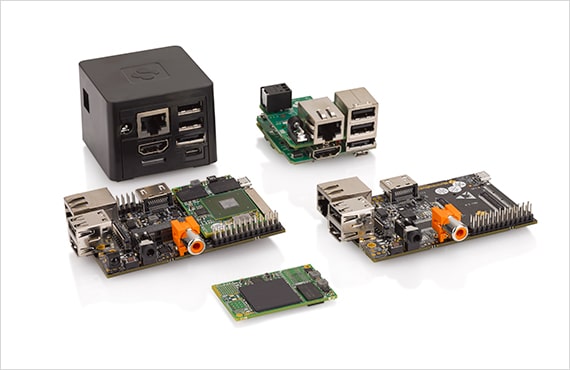 Ah I though that MiroSOM was only needed for the memory upgrade.

But yeah would be great with a super charged Organelle.

Nice to know that these things are possible down the road when i get to the point where it is necessary .

Yeah is a ‘system on a module’

I have also been looking at some others benefits:

This looks cool. Makes perfect sense for a developer setup. However I find that the main beauty of the Organelle is that everyone is using the same closed hardware system. This makes development much easier to spread out on different people, all patches work for everyone and so on. Also I really like to think about the Organelle as something that is not a computer. Or rather get all the it stuff out of the way. For me this is not about the fact that it actually IS a computer, but that it doesn’t FEEL like a computer. Even when pluging in a monitor, keyboard and mouse it is still different enough that I don’t feel like checking Facebook real quick.

Don’t really think this post is contributing much to this thread but I guess I just want to say that I really like the Organelle and hope that Critter and Guitari keeps it going for a long time and not get tempted to change out the hardware just because they can, and then ends up having user develop for two different systems, and that one system can get “outdated”.

When that is said I support all experementation and development around this really cool plattform! Keep on blowing us away @thetechnobear !

I find that the main beauty of the Organelle is that everyone is using the same closed hardware system. This makes development much easier to spread out on different people, all patches work for everyone and so on

I absolutely agree, and said as much in this post recently, a common form is what differentiates Organelle from similar diy solutions.

this ‘hack’ exists for three reasons:

so yeah, its a special case… a hack, not a recommended upgrade path for all.

I’d like to add, I think i misunderstood all this upgrading the other day. From what I understood, I thought that Organelle had all ready 4 cores and more memory, I just thought that it wasnt being utilized, I didnt know I had to buy/install all kinds of stuff into it.

The reason actually I changed from Axoloti to Organelle was actually to avoid all that modification stuff, as Christopher also said, it is nice t have a closed device that actually feels like an instrument, without having to do all kinds of mods to it. To be honest I don’t care about DIY at all and not interested in it, I care about making music and experimenting with musical algorithms and stuff like that… Not mess around with wires etc.

As I wrote, I thought actually this was something that could be done with the existing device. I didnt think I had to install new memory and so on, so I am not sure I am going down this road.

I made a kind of super ‘Organelle’ too (well, it’s a clone TBH):

I guess you are in the UK, where did you get this from?

Nope, I live in southern Spain…
but I did order it from the uk… iirc I ordered from newit.co.uk
(there aren’t that many suppliers, and the price varies a lot)

If i was ordering another, id probably try the dual core… as mention on another thread, the quad has a ‘startup issue’, its only minor… but it may be its not an issue with the dual.
and the dual would be fine, unless your doing heavy compiling, and possibly better for thermal reasons.

Id also get the one with built in wifi (though, see my notes about being lucky on this) , this has been awesome for me… as i also use the SD card for patch storage, I have 2 USB ports completely free… handy for a wireless keyboard/mouse and midi controllers. (without having to resort to a usb hub hanging off the organelle)

Aha, so much for my guessing!

I had seen the i4Pro on eBay, looks like from the same company but a tenner more than your link so thanks very much for that.

I was going to get the wifi one, fingers crossed I guess that it will be a 1.3 rather than the 1.5 otherwise I will have a look at building the kernel when it arrives, all fun and games!

The two core is only 15 quid cheaper and out of stock so I ordered a 4 core.

Thanks again for all your help.

ok, just be aware with the 4 core, you will need to plug in power, remove power (after 1 sec), then plug in again

building kernel, yeah, Ive tried a few times, but there are some issues… but if you have some experience with these things, then we can talk about it.
(but ive lost quite a few hours trying in the past, so honestly… its only going to happen if some one can supply some new input

I do have experience building/altering Linux kernels but I’m not an expert.

I know how painful it can be!

So fingers crossed mine is the 1.3.

yeah, you can see my other thread… there are two main issues…

a) we dont have the exact commit and source code used for the organelle/etc build… so we can’t just go from there… and I tried as close as we know, and it didnt work (see other thread)

b) ideally we’d move to the latest kernel possible, which has many fixes - but when doing this , ive not got past uboot, for some reason it doesn’t find the sdcard (though uboot does), this is suppose to be due to partition number changes, but even accounting for that it doesn’t work.

anyway, im sure one rainy day, when my girlfriend is away… i’ll have another go, but its not a trivial thing.
(and im used to building kernels without much trouble)

Just had a look at what I guess is your other thread: Kernel compilation looks like fun!

I have been thinking about the power issue at startup while cooking dinner.

how did you replace the SOC? is it some sort of ZIF setup or did you have to unsolder it

(I don’t own an organelle yet)

@audiojack yes, just a push fit… easy stuff, as long as your careful

its a reported bug and fix… iirc its something to do with an assumption of memory state, and when its booted ‘warm’ its still has electrical charge, so its in the expected state. (so not temperature as such)… its logged against the quad core, which is why i assume its not present in the dual.
once you know, its a non-issue, as its 100% predicatable, and once booted its 100% stable, as far as Ive seen.

(its one of the reasons, id eventually like to move to new kernel/uboot to bring in the fix)

Thanks for the info.

The organelle is arriving today, I’m guessing the i4Pro will arrive next week sometime, I will let you know how it goes…

@thetechnobear neat! can we see a photo?

also, what’s the board like? are any GPIOs broken out? is this hardware hackable?