i read about this new project, called minidexed, running 8 instances of dexed as a multimbral synth on rasp pi. GitHub - probonopd/MiniDexed: Dexed FM synthesizer similar to DX7 running on a bare metal Raspberry Pi (without a Linux kernel or operating system)

i figured since organelle runs on rasp pi i cud try to boot it and see what happens.

Connected to a monitor with speakers through HDMI and a usb midi controller, i got sound! (only if i configured minidexed.ini to run sound through HDMI, the “i2s” and “pwm” sound devices did not work)

on the monitor i got confirmation that it detected a rotary knob and lcd, but I couldnt get those to respond. I couldnt change any patches or use the built-in organelle keys.

i’m new to organelle, one of my summer projects is to learn pure data and make a few patches, would be cool to mess around with this also. does anybody with more experience would have an idea if the the organelle knobs and display could work on this? 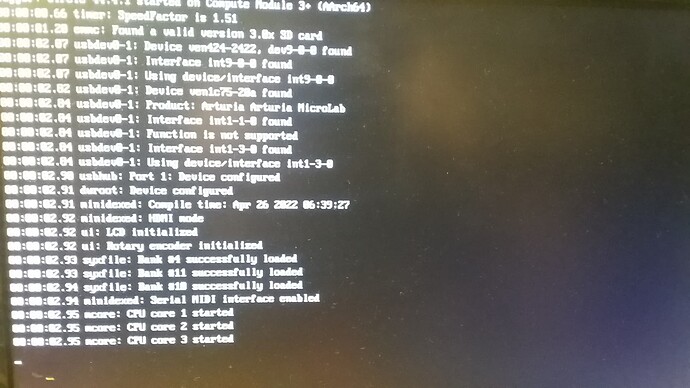 That looks like a cool idea! Since it is running on a Raspberry Pi without an OS the only way to get the hardware working (screen, encoder, built in audio) would be to modify the source and rebuild the project. This would be a bit of a chore…

While having it run on bare metal is fun, building the Dexed synth engine as a Pd object would also be a cool way to bring some of these sounds to the Organelle. Then it could be used in different kinds of patches. Perhaps there is some effort going on around this as it might also be a bigish task.

I’m new to the world of Pi’s so this might be a dumb question, but as Minidexed runs without an OS does that mean you’re also able to keep your Organelle running as an Organelle and boot into whichever you want to use at a given time?

Also, if you’re looking to get into Pd there are some decent tutorials on the Really Useful Plugins YT channel with a pretty in-depth DX-7 style patch that might be of interest.

thanks for the link! i like these tutorials better than the stuff that i found

Related sidenote: I am working on an SDL hardware-def that uses joystick & keys to emulate the primary rotary-encoder and OLED, and it seems to be running ok. pi has some hardware-accelerated rotary-encoder kernel-level stuff, so that might be a better route if you have some rotary-encoders to test with, but the code would need a bit of modding & testing (I can write it, if you can test it.)

I have another question here about how the interface is supposed to work, but it currently builds & runs fine on intel mac & pi4, and should work great on any pi or other arm that has SDL (all of them do.) I originally wanted to use joystick, so I could use it on handheld Gameboy-like devices, with I have a few of, and a steamdeck.

I have these devices to test on, all of these have “normal” LCDs that act as a lowres screen for framebuffer/X:

Here is my fork with new sdlpi device (make sdlpi)