Noooo sorry to hear that

Good luck will be around soon.

Okay so the root mother patch is read only. D’oh.
I remember that the Organelle defaults to using mother.pd if it is in the patches folder, so will try playing with that - i’m into ‘audio IO’ but am a bit confused by what I see. There is only a slider to display the Organelles master volume knob position.
This is what I see, but what do I gots to do? 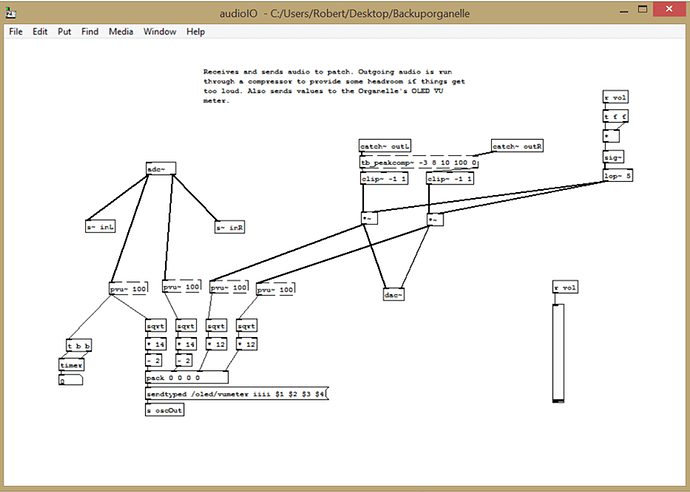 Well, I have never used an Organelle and it’s been ages since doing any pd. But…

Looks like the two [catch~] get the audio from the custom patch, and then pipe it through a [peakcomp~] followed by [clip~]. You want to keep the last. But just bypass the peak compressor.

Ah, the custom mother.pd i placed in my Patches folder no longer launches when i open a new patch - it defaults to using the read-only mother.pd patch in /root. Could this be a result of the folder systems in OS 2.2 and higher?
@thetechnobear / @oweno / @chrisk

You can remount the SD card to edit the mother.pd.

Just type this in the command line.

mount / -o remount,rw
Remember to be careful about powering down after doing this. It will be much easier to corrupt your OS!

I would say don’t completely disable the compressor. [clip] doesn’t sound that great unless you are looking for that style of distortion. Better to lower the compression settings or add some kind of [expr~ tahn($v1)] saturator.

Ah, the custom mother.pd i placed in my Patches folder no longer launches when i open a new patch

currently its loading mother.pd from in order of preference
a) parent of patch directory/mother.pd e.g. /Patches/Synth/wrps/ will load from /Patches/Synth (see note below)
b)/System/mother.pd
c) /root/mother.pd (technically, the firmware dir, rather than root)

I suspect (a) is the confusion, and I should probably change… this is a bit of a quirk from the previous non-heirarchical menus. I think, it used to load from /Patches/mother.pd , but honestly id need to go back and check the code to be certain.

However, Im not going to bother checking, Im just going fix it to the way I think it should be (and you expect) which is to load from the same directory as the main.pd, that allows for overriding for a specific patch

if you want to override for ALL patches , then you should put it in /System/mother.pd

You can remount the SD card to edit the mother.pd.

Id recommend you don’t to this.
if you do this, as soon as you perform the next upgrade, your changes will be overwritten, without warning

better to put it on the usb stick, where it wont get touched during an upgrade.
but remember, when you do an upgrade, you will want to review your mother.pd against the new one.

I will place my edited version it in the system folder, thank you guys.
On ORGANELLE OS 1 you could whack a custom mother.PD in the patches folder and it would use that instead of the one located in /root.
I used this method to get an expression pedal to work with the organelle in the past.
Can anyone offer tips on understanding and customising the compressor settings?

@thetechnobear, I like this method for loading mother.pd. Also good it is different from current setup, it won’t break upon upgrading for folks that have overridden mother in Patches/. Although it is still possible to get messed up if a user has an old mother.pd in a patch folder, so ideally there would just be a version tag in mother.pd and it wouldn’t get loaded if it didn’t match OS version.

I don’t understand why any compressor at all is needed. Limiting and compression are two very different things.

Though you would want to limit the signals by clipping, to avoid overloading outputs. If this distorts, it’s only because of poor gain-staging earlier in the chain. The solution is not to change the limiting, but to change the incorrect (excessive) gain.

I’ve gotta say I love the sound of the uncompressed, unlimited output on some patches - but not all. Resonant filters sing clearer and things just generally sound much crisper, but in some patches I was really missing some bottom end. For me, I don’t think this really matters as I pass the organelle through adjustable filters and compressors on other equipment before it gets to my ears anyway so I can probably claw that back.
I haven’t looked at that help file yet but will play around with settings until I find something I like.

Although it is still possible to get messed up if a user has an old mother.pd in a patch folder, so ideally there would just be a version tag in mother.pd and it wouldn’t get loaded if it didn’t match OS version.

yeah. this is a concern, as Ive seen past posts here, with errors related to using customised mother patches.
the issue is , I don’t want to load the mother patch, only then to have to unload it because its the wrong version… but I guess, given a pure data patch (mother.pd) is just plain text, I can easily search it for a version tag… say in a comment.

also I think we could version the mother patch (=protocol) separately from the mother host, so that we only update the motherpd version, if something is changed in it that we know is means ‘custom mother.pd’ need reviewing… which I think is not often the case.

there is a slight issue, how to notify the user, that his custom mother.pd has been ignored?
I guess we could try to find a way to flash a message on the display… but that’s going to be a bit annoying.
(hmm, we could then move the mother.pd, to mother.pd.old, so its only displayed once)

I don’t understand why any compressor at all is needed. Limiting and compression are two very different things.

It’s a peak/RMS compressor/limiter to keep user patches from hard clipping. I see it as more of a safety feature, and trivial to bypass if you don’t want it in the chain.

The Organelle, as you know, runs Pure Data patches that may be created by musicians who may not be doing what is considered “normal” gain staging, so the limiter/compressor obviously protects your ears from these innocent, creative choices. Unless you’re doing some crazy hard clipping, I find it doesn’t color the sound very much, if at all. YMMV. That said, Pure Data definitely has a “color” to it. I personally am fond of it, it’s very warm and can be very lush and smooth.

Yes I just got earshagged by some shrill delay feedback after disabling the limiter. Back on it goes tomomorrow…

Hope you weren’t in headphones. That can cause serious damage. I have PTSD from working on synth patches with no limiter. Ouch!

I guess I am used to pd, Reaktor, and Max, where final limiting is the duty of the coder. Believe me it’s the first thing I teach my Max students!

ok, mother.pd is picked up from patch directory in TB22b10 release today

great, I replied about OS / mother.pd stuff on that topic

Revisited this thread after realizing some of my synth pads in orac were causing a huge volume drop in the drum sounds. Started simple by taking out the compressor altogether, but wondering if anyone has found what they feel are “ideal” settings for it. So nice that these things are all editable

I was caught by this after purchasing it and thought, the Organelle sounded dull. Many of the patches made for the organelle have a moog~ filter with a preset filter frequency that is quite low (fir some bizzare reason). Check any of the patches using this, especially the Mutable imitations and you will se this is the case. Check the filter frequency on any of thse patches.