Having decided I don’t need to do this anytime soon, I can point out the cheap deal I found on eBay, for someone else.

I tried supercharging with an i4p But then learned it needs a strange booting protocol using power cycling in timing and such. Anyway, I never got it to really work with the 4 core SoM. I learned from Tecno Bear that you can use the dual core without any special power cycling during boot to get it to work. Now I have a lot more ram with 2 core and built-in Wi-Fi.

It would be really cool to be able to activate the Bluetooth module also… But I don’t think there’s any thing I know how to do for that… Just imagine direct Bluetooth midi.

Yeah the quad sometimes requires you to power it on twice - it’s not that much of an issue once you know.

I do now know it’s just the kernel build though, not hardware, as with an Armbian build specifically for the quad - it boots fine.
at some point I might switch to armbian but for now I just double boot :).

So, the organelle Os will work in this quad / dual microSOM without the need to recompiling kernel / etc? . Has someone already try with the newest organelle os?. Greetings.

It’s not that I’m reaching the limit of the organelle (yet…) but I tend to like supercharged things and now that I have all this free time, I plan to port all my brutal patches to it and also start testing out pd~ . Greetings from Galicia.

I ended up doing this awesome upgrade… I coudnt get the 4 core to work but i got a dual core with wifi! Its really great. I have the CuBox left over… @technobear do you think we could turn our CuBoxes into another little organelle??

Build an audio interface for it?

Odd, quad works fine for me ?!

Cubox, I tried with the dac it comes with and it was dreadful sound - so didn’t use it for anything.

As an organelle pretty useless without a hardware interface ( pots,screen) - and then adding a new sound card - at that point you might as well just use a rPI

Big fan. I’ve had my 2nd-hand Organelle 1 for a couple months now ~ I’m inspired to finally begin the journey of learning a programming language ~> PD !

Orac 2.0 is truly wonderful ~ I’m enjoying it immensely as it is … yet the thought of an upgrade to the Organelle’s CPU has crossed my mind more than a couple of times (especially when using some of the newer modules)

I’m wondering if the parts in this cubox i4pro would be suitable to upgrade my organelle 1 like you’ve done with your spare ?

I can’t spot a microSOM version on this site

Thanks for all your wonderful work in the community

Yup that’s exactly what I did.

Of course I cannot guarantee it’ll work for you,
eg there might be different revisions of the SoM.

It’s simple to do.

One thing to be clear, the organelle-1 patches are generally not multi-threaded , so don’t really utilize the multiple cores.
So improvements come from more memory and that some tasks can get moved to other cores ( also some parts of orac are run on threads)
Anyway don’t expect miracles ;).

Also i did mention here (?) , sometimes with this som the organelle would not start first time - almost felt like when it was ‘cold’ , it always booted the second time though.
That said bizarrely it doesn’t seem to do that anymore ?!

I have one last question to clarify on this topic before I purchase a Cubox :

I’m using Organelle-1 version of the OS , - I assume I’ll be able to use patches (with multi-threading) designed for the Organelle M, on the Organelle 1 ?

looks like solid-run also sell the boards on their own !

(the cubox is still cheaper though hehe) 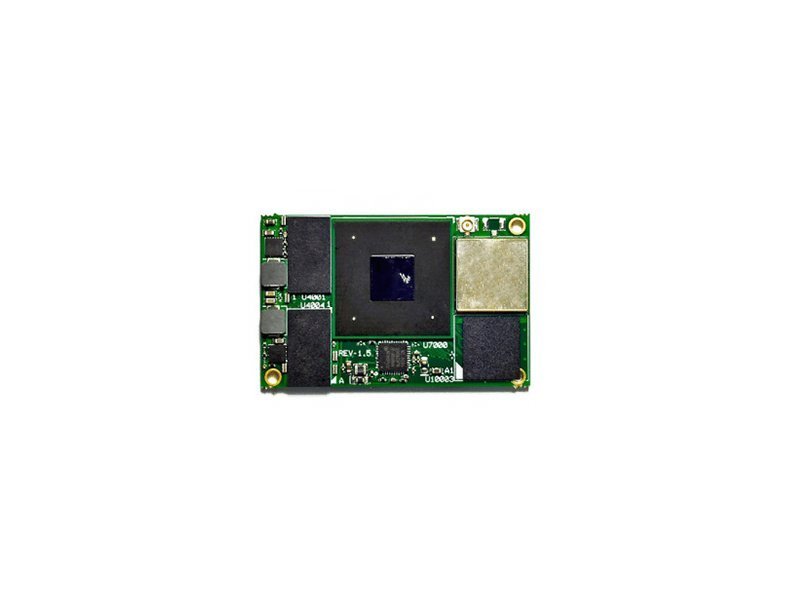 Hey! I was wondering if anyone tested this on an ETC. I have both an Organelle-1 and an ETC and while there’s some other features in the newer Organelle-M and EYESY what I am missing the most is just power (CPU/RAM) on both machines. Also: I like the concept of recycling/reusing stuff

If this would work it would be awesome with 2 GB ram on the ETC (which is even more than the EYESY has), which should allow for loading more images… 512 mb fill up very quickly!

I opened both machines to check quickly, and the SOM look identical so in theory it should work?

I opened both machines to check quickly, and the SOM look identical so in theory it should work?

it should work… though I dont have a ETC to check

however, I should point out, as I did in original post - single core performance is not much better - and pygame only uses a single core.
you might get some better performance due to other tasks being on other cores, and also ram and gpu gains.
ram should just be availbable without code changes I believe.

this is a good time to make a ‘timely comment’ about upgrading Organelle-1 and ETC to quad core SoM vs Organelle-M/EYESY, and benefits…

of course, its great we can upgrade the SoM to make better use of our existing stuff… hey thats why I did this in the first place

BUT… comparing an upgraded Organelle-1/ETC to M/Eyesy is frankly comparing apples n’ oranges.

the issue is the os/software
the O1/ETC are using arch linux with particular drivers, that are nigh impossible to upgrade

the OM/Eyesy are using a customised raspbian, which is completly up to date.

you cannot use the OM/Eyesy system image on the O1/ETC due to this.
generally this is not an issue, but it can be since the the OM/Eyesy is much more up to date, and has access to quiet a lot of software that is very difficult to get running on the older arch linux used by O1/ETC

example: Eyesy is able to run OpenFrameworks (see beta), this would be difficult/perhaps impossible to get running on an (upgraded) ETC.

this is not to dissuade people from ‘upgrading’ their ETC/M1… its a fun thing to do (at your own risk ;))

BUT lets not bring in comparisons to Eyesy/OM… its not realistic comparison they are quite different, and I don’t want people seeing this thread… thinking this upgrade, somehow is a way to get an eyesy/orgnanellem

Thanks for the quick reply (and thanks for Orac and everything else you do!)
Yeah of course it is not equivalent by any means!

however, I should point out, as I did in original post - single core performance is not much better - and pygame only uses a single core.

that was going to be my next question! I was hoping that some multithreading would be possible within pygame… oh well

example: Eyesy is able to run OpenFrameworks (see beta), this would be difficult/perhaps impossible to get running on an (upgraded) ETC.

Yes! I was also quite excited about that since in general I feel quite limited with Pygame. Ideally I would like something like the ETC/EYESY that could run Processing (the learning curve seems less steep than OF)

I’m also considering selling the ETC and getting a new Organelle M, since I could use 2 organelles for different projects and I could always install OTC (thanks for that again!) on the O1…

Need to make up my mind!

I got a Cubox with version 1.5 of the SOM ~> from what I’ve read this means the built-in WiFi won’t work out of the box…

Mark - how far did you get compiling a compatible kernel last time you had a crack ?

FYI I have next to no experience coding or compiling ~> so, looking at the arch Linux wiki ‘how-to’ is quite daunting

However, if you feel like sharing: I’d be keen to poke around whatever work you did manage to do on that kernel

[EDIT] : [I am unsure whether it’s as simple as installing drivers for said wifi chip (I wish) or a new kernel is needed (as I suspect)]

I had cycles->koto->superposition going on one chain and the CPU usage didn’t even exceed 50% !

Needless to say : dreams of my OG1 using Orac and being a beastly DnB machine for live sets /&/ jamming is now realised

The WiFi should work ‘out of the box’ - mine does.
( ie organelle os already had compatible drivers)

Building kernel drivers is not really feasible on the organelle image. I did have a go at building an alternative distro which I’ve detailed in another post here - it seemed to work fine - but I never really followed up on it.

I recall reading earlier in this thread that v.1.5 of the SOM had an incompatible wifi chip … is that now superfluous because of Organelle OS 4.0 ?

AP mode is not working - the ‘Connected AP Mode’ message displays continuously upon selection but, the menu item only briefly switches from ‘Start AP’ to ‘Stop AP’ then returns to ‘Start AP’

any help would be greatly appreciated but is not expected

Thank you for all of your work here on these forums

)
given i was so specific, i’d say I’d looked up chipsets - and so knew why 1.5 would be incompatible.
but it was a long time ago, so can’t remember specifics, you’d have to go dig into specs.

as for recompiling kernel, as I said its difficult - again, Ive commented on this before above

yeah, you can see my other thread… there are two main issues… a) we dont have the exact commit and source code used for the organelle/etc build… so we can’t just go from there… and I tried as close as we know, and it didnt work (see other thread) b) ideally we’d move to the latest kernel possible, which has many fixes - but when doing this , ive not got past uboot, for some reason it doesn’t find the sdcard (though uboot does), this is suppose to be due to partition number changes, but even ac…

here are some details from when I tried last time
https://forum.critterandguitari.com/t/kernel-compilation/1609

this is the post where I looked into creating a new ‘distro’ based on armbian
https://forum.critterandguitari.com/t/organelle-linux-upgrade-project/2351

BUT, I didnt really finish this off, so whilst it looked promising, its more of a ‘project’ than something people can just use.

so unfortunately, I think all I can suggest is using an usb wifi stick again…

as I mentioned at the start, Ive only any experience with the 1.3 revision, also the one Andy got working was also 1.3. ( I guess, the 1.3 stock is depleted now, give i was a couple of years ago!)

quick update: I got a second hand cubox on ebay. Turns out it was the old 1.3 version of the som so built in wifi is working which is a nice treat. I’ve tried it on the Organelle1 so far, haven’t checked on the ETC. But it is working great! Thanks again for this amazing hack!

I’m not experiencing the issue @thetechnobear mentioned about needing to boot up twice, but I do feel that the organelle tends to get a little warmer after being turned on for a few hours, something I didn’t notice before. Is there an easy way to check CPU temperature f ex on the terminal?