@rick_monster ported these grid apps from the monome Aleph to pure data.

there are some problems, these objects cannot access organelle serialosc. also i have no knowledge about linux and @rick_monster does not have an organelle

so, could someone gives a hand? i think it would be great to add these grid apps to the organelle family

monome grid apps for puredata. Contribute to boqs/pd-grid development by creating an account on GitHub.

I thought @quilime had resolved this issues on this thread?

and posted installations stuff on his GitHub here 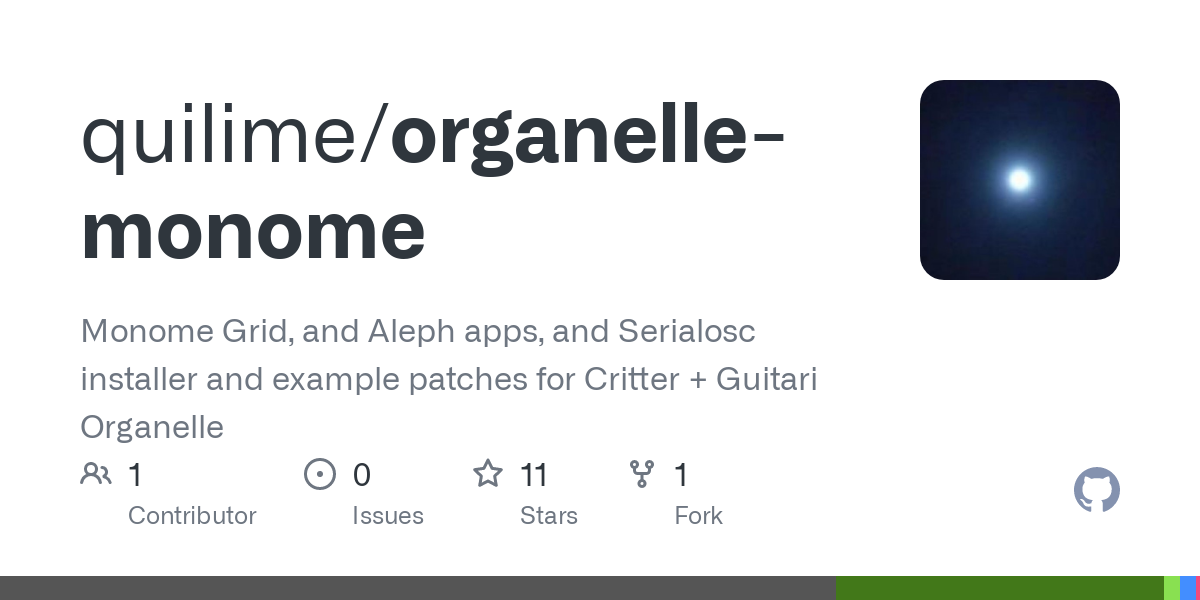 sorry, don’t have a monome… and given the number of controllers i have cant justify one

Hey @sno ! Yeah, there are some weird issues getting this to work with SerialOSC on the Organelle because these programs have the port numbers hard coded, while SerialOSC picks a random port number every time (which is preferred). I’ll take another look at this again.

Think it was just sitting there hidden away on the dev branch for a while, since I was the only known user!

Looking good! I’ve got these apps working and compiled for Organelle, which you’ll find in this zip:

In this zip is a new Monome-Installer, which you need to place at the root of the Patches folder before running. It will update serialosc to utilizes the daemon as a system service. I’ve found that sometimes you need to unplug/plug the Monome in when switching patches so there’s there’s still a few things to iron out before committing it to the main repo. It’s still a WIP, but shouldn’t mess up any of your existing Monome patches.

@sno could you give a try? Maybe you can take a look at the Meadowphysics and WhiteWhale patches in the pd-grid/ folder and get some examples going with the Organelle.

Let me know if serialosc installs correctly, and the Monome light up. After running the Installation patch, try running the pd-grid/grid-help.pd patch from the Organelle Desktop: The Monome should get “focus” when clicking on “focus”, and individual LED’s should light up when clicking the message boxes. Thanks @rick_monster for these apps, they are pretty sweet!

When we iron out all the kinks and make a few examples that work on the Organelle (without being in Desktop mode obviously), I’ll update my github and patches on the patchrepo.

this is awesome! thanks for sharing!
going to test sometime this week…

nice @quilime! i’ll try it out this week and report back!
thank you!

with the disclaimers out the way, I’m nonetheless pretty stoked that these externals have made it to organelle!

hi @quilime!
my organelle is on OS 3.1 running on a sd card.
i ran the Monome-Installer with no luck for the first time

second time, open the Monome-Installer patch and change the path message, my Patches root folder is different because of the sd card.

monome works with your basic poly patch but no luck with grid-help.pd patch… maybe the new installer did not overwrite the previous one. i had the previous serialosc running on my organelle.
all my other monome patches are still working.
quilime February 27, 2018, 2:39am #12

Oh interesting — yes, my location assumes “usbdrive”. I wish I didn’t have to hard-code that path, but it appears the Organelle loads the patch into a temp folder when it runs it, so I don’t know of a way to find the relative path yet.

BTW by installing this, all the old monome apps should still work. This installer just updates serialosc.

If you open up “install.sh” you can see paths defined in the variables at the top and what the script does. It essentially creates links and copies binaries to the right places, and starts serialosc as a daemon – which means it will always be running when the Organelle starts up. Notice I’ve hardcoded the path here as well…

so i should also change path inside the "install.sh” and try to reinstall?

Yes – I just assumed the patch would be on the usbdrive, you’ll need to change it to be the SDcard if that’s where it is on your system. I’m attempting to figure out a way to not hardcode this path…

ok.
change path to sdcard on patch and on "install.sh”. installation was successful got the monome blink and lightshow at the end.
now all monome patches won’t work

they seem to focus on serialosc and loose it right away, if i restart serialosc nothing happens… on grid pd-grid object it also happens but it takes a little more time to loose focus, after that i cannot reconnect to serialosc.
the lightshow at the end of the install also stopped automatic. don’t know if it’s supposed to do that…
on pd window no errors, udp says it it connects to port x.

update:
replaced the serialosc.pd in new Monome-Installer with previous serialosc.pd in my monome patches.
It is working! with both older patches and grid from grid-help.pd.
but after a while (around 1 minute) all loose focus

if i restart serialosc focus is enable again on all normal patches.
with grid from grid-help.pd have to restart the patch to enable serialosc again.
none the less all loose focus again.

Ah – I’ll continue working with it. The new serialosc is running as a daemon in the background so maybe it’s interfering. From the commandline, you can disable the serialosc daemon it and should be able to use the old patches again. Run these commands in the terminal:

Then restart the organelle, and try the old patches. Hopefully this will get you back to where you were.

ran the commands, restarted the organelle and replaced the serialosc.pd from new Monomer-Installer with previous version, all back to normal

thanks @quilime
grid from grid-help.pd not working, as expected right?

It’s working if you have the new serialosc running as a daemon. However, you can hack it when running in the Desktop mode by running serialoscd on the commandline. Verify it’s working by unplugging/plugging in the Monome you should see the device show up.

If the device shows up, then run grid_help.pd and it should work after clicking the “focus” message box.

I’ll keep hammering on getting the installation to be bulletproof. Knowing you run the patches on the sdcard, and the fact that now with OSv3 people can have patches in subfolders means I have a bit more work to do to make sure it can install from anywhere.

I don’t want to take any credit for the designs of these grid apps - all the creativity & research is tehn & catfact’s work, originally developed for monome aleph & eurorack modules. I loved them so much on the aleph I finally got round to porting them.
Please don’t pester tehn/monome if these externals have bugs. But feel free to bip me about any probs you encounter.

with the disclaimers out the way, I’m nonetheless pretty stoked that these externals have made it to organelle!

Thanks for clarifying, @rick_monster A lot of my work is leveraging existing code as well. Duct-tape, twine and Velcro

I will absolutely make sure to credit Brian and Ezra and all the original authors when this is all wrapped up in a nice Organelle installer.

However, you can hack it when running in the Desktop mode by running serialoscd on the commandline. Verify it’s working by unplugging/plugging in the Monome you should see the device show up.

If the device shows up, then run grid_help.pd and it should work after clicking the “focus” message box.

this way, grid and grid_help.pd works!

and all the older patches work as well

Knowing you run the patches on the sdcard, and the fact that now with OSv3 people can have patches in subfolders means I have a bit more work to do to make sure it can install from anywhere.

that is very true. i’m using and sdcard and all my monome patches are inside a folder called monome, sorry

i’ll try and do that!

thanks for the good work @quilime! hope you can get all these processes to become automatic