This is quite a cool drone maker! Seems like it’s all PD. Would it work on an Organelle?

My guess would be yes. You just would have to adapt the user interface for Organelle, which should be doable.

I put this on my M last night and it does work, though a couple of small changes are needed to pull it in line with the Organelle. Two points I noticed from playing around are that the oscillators bleed even if a note hasn’t been triggered leaving a constant underlying drone, and I did get a couple of CPU spikes which caused the odd interrupt.

I’ve been thinking about how to approach adapting the UI for the organelle, I’ll post it here if I get it to a reasonable point.

Fantastic news! I also thought about the UI - a difficult task because of all those sliders. Maybe one could map all the buttons and toggles to the keyboard and the sliders to the knobs, then put the values of the most important sliders on the first few pages? The effects probably would come last.

I think it would be helpful, if someone who has experience with the actual instrument could identify the most important controls, the ones one would change most often. Anyone?

Another question: is it possible to use keys as a shift button for the knobs and control/display more than four values on one page? E.g. page one would display 8 values. The first four would be assigned to the knobs, the second four to key+knob.

Just a few ideas. Good luck with coding and thank you for picking this up!

Here you go, I’ve remapped the GUI to Organelle controls:

The function of pots 1 - 4 will change depending on the selected page.

Aux: unused, though aux LED is linked the LFO.

I really like how Mike Moreno put this patch together, it feels very much in tune with ideas and flow of the LYRA 8 so I tried to keep the Organelle adaption as in tune with that as I could. The number of parameters does mean it is a little menu dive-y but I haven’t found navigation too bad while I’ve been playing with it.

A couple of notes on the patch itself:

I’ve been thinking about adding MIDI CC control to the parameters, making some form of start-up animation and making the menus a little nicer (this is my first Organelle patch and the display messages are something I’m yet to explore in detail) but for now I’m quite eager to make some noise.

Congratulations! Very impressed how fast you ported this. I will try this out as soon as possible and provide feedback.

About pot-pickup: I used o-knob for some patches I ported. Easy to implement and functional.

Let me know what you think when you’ve spent some time with it.

& thanks for tip on o-knob, I’ll check that out.

Hi there, it looks super nice. I’ve installed it on my OG1 but I can’t have any sounds. What’s the trigger buttons. I’ve tried the “v 1 - 8: Voice 1 to 8 trigger sensors” but it wouldn’t trigger anything?… yet.

hmm, maybe it’s not initialising properly. If you go to page 7 (hold & pitch) and set both pitch controls to 64 then go to page 12 (distortion) and turn volume up to 127 do you get any sound?

ah, okay. If you’re able to check the Pd console to see if there are any errors that would be great, I may have forgotten to include an abstraction, don’t worry if not.

I’m getting the same as @nicolasbulb

I’ve just pulled the file off my Organelle M, let me know if this works. LIRA-8 | Patchstorage

I have noticed it’s not initialising properly, but I’m still getting sound… I have an idea of what is causing the initialisation to be a little off though so I’ll take a look at that soon.

Hey, the latest version on Patchstorage seems to work.

yay! I’m not sure I’ve tried all the settings and if I’m trying them right but I’m getting nice weird sounds. Many thanks for the patch.

I tested this on my Organelle M:

So again: congratulations and many thanks for your work!

Edit: I wanted to use Lira with external MIDI. This is difficult at the moment, as MIDI notes do the same as the according key, i.e. change pages of the UI. Mike Moreno’s read me says about MIDI: “Use midi notes from C1 to G1 to trigger the sensors or click on them to hold the note.” It does not seem to work this way though at the moment.
You wrote that there is a part of the patch that handles MIDI. I was not able to identify it. Could you tell me, where this is so I can try to figure out how this acutually works?

Edit 2: I suggest reading the manual of the original to understand the Lira 8, especially the later pages.

Thanks so much! I’m glad everything is working

Regarding the MIDI section of the patch, you can find that in main.pd: 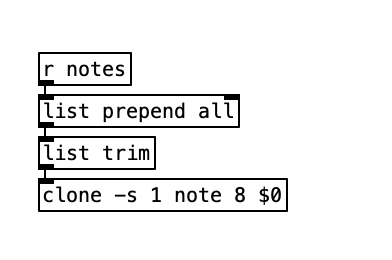 Looking at the original, rather than [r notes] it uses [notein] followed by [pack f f] with note value to the left inlet of pack and velocity to the right inlet: 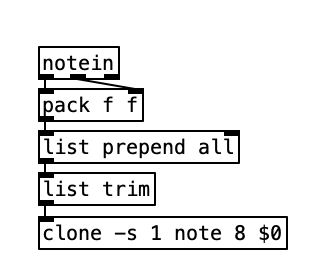 I remember switching that over when I was trying to figure out how the patch worked, but I’m pretty sure if you switch it back it should work as described in the read me without effecting triggering from the Organelle buttons. I’ll add it to my to-do list as well.

Thank you so much @pmnsl . Everything works seamlessly on my Organelle M.
I really like the layout as well. Congratulations!

@pmnsl this is a great patch, thank you so much