Hey man! How is it going with the tremolo?! I havent been time traveling enough to be able to make it myself yet.

Tremolo stuff is taken from Pierre Massat and then added some delay lines for fun as there was a spare knob.

Let me know if any problems as it will help me learn!

Here are a few demos of the Pow Pow’s Polybeats patch in action:

These two are from Pow Pow himself!

It’s really cool! I like this patch a lot! combined with the Arpeggiator Synth it’s a blast. PureData is awesome. The Grids Patch from @spoitras is also really heavy. …and i love the Samples you put in. sounds so Lofi but interesting inside the Algorithm.

A couple new patches ! been a sec, but we have some new MIDI file players that are real fun:

705 Likes, 54 Comments - Critter &amp; Guitari (@critterguitari) on Instagram: “Chill out with these new MIDI file players for the Organelle! With this one you can record a…”

Play any midi file, just replace the ones in the folder with your own!

A couple new items this week. Nothing brand new, but a few derivative patches. A version of Pow Pow’s Polybeats with different sounds and two new versions of Punchy. Now you can punch in velocity with each note which adds a new dimension.

Load it up with your sounds, queue up a backing track & play samples over it - play your song infinite ways/remix all the time!

thanks for the new patches yall!

i gotta start contributing stuff too

Glad you are enjoying! Here is the new one for this week: Drummy

Here are two demos of Drummy in action! 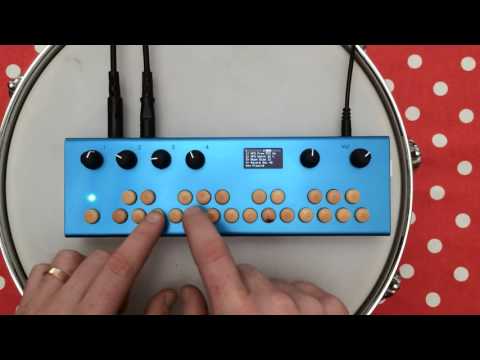 Genny 1 is now available: http://organelle.io
It’s an arpeggiator which plays notes in random order and register. Two low frequency oscillators control the timing of the notes. The audio output is circular panned. The Aux button enables a keyboard latch so you can set it and forget it!

We made this patch a while ago as a demonstration of an uncommon functionality. Not many musical instruments double as an timer! We thought this might come in handy in the kitchen (especially for Thanksgiving!), so we polished it up and posted it.

The idea is simple: set the time with 3 knobs (hours, minutes, and seconds) and then press the Aux button to begin counting down. When the timer runs out, the alarm bells sound! The fourth knob controls the volume of a tick tock sound, and they keys also play a simple synth tone for fun.

Although this patch may be more of a novelty than musically useful, it might come in handy sometimes! All of the sounds (the tick tock and alarm bells) may be replaced with your own .wav files. So you can really have any sound loop for a certain amount of time and then something else start sounding when the timer runs out, like when it is time to get on stage.

The I Take Up patch is now available!

Record and play all kinds of crazy loops! Hit the Aux button (or foot pedal) to record into a loop (use the keyboard to select one of 24 loops), causing the loop to grow in length. Adjust the playback speed and direction with the knob 4. With knob 3 control how much of the playing loop is mixed into the recording, this is when it really gets fun…

Ah, “I Take Up” is fantastic! Thanks for making this.

Is there a way to make/ a patch out there already that models a standard drum machine like an 808 or xr-20? Have y’all already done it by just messing with the pure data inputs or does this not exist?