(when trying to midimap the Push knobs)

yeah, you wont really be able to do this…

the push 2 has all the parameters there, so the encoders are already used.
when you do midi mapping on a push 2, you are trying still trying to map to the ‘external keyboard’ device.

organelle
push2 (connected via MEC thru to Pd/Orac)
external keyboard with 4 pots on its, and mod wheel (connected to PD/Orac)

the push2 becomes really a replacement for the organelle display/pots etc.
when you do midi mapping on the push2 , your using the push2 to midi map orac parameters to the external keyboard pots/mod wheel, (without having to reach for the Organelle and use its menus etc)

I switched to a powered hub with the Push 2 and a small midi keyboard controller and Orac works perfectly with both controllers as you describe.

Am I mistaken that at least a few of the mutable patches should be Push 2 “equipped” via MEC?

Am I mistaken that at least a few of the mutable patches should be Push 2 “equipped” via MEC?

hmm, thats a good question…
they were all based on the same Kontrol architecture as Orac,
but honestly Ive not tested them since Ive updated Kontrol for Orac 2, which had quite a lot of changes…its ‘basically’ the same, but the devil is in the detail - so they may or may not work…

my thoughts were, that you can load the same things into Orac, so I dont really see any real advantage of developing as separate patches - you could save each as an orac preset to quickly recall.
and in Orac, you can then do things like change the reverb out for something else

Got it–yes, they dont’ seem to work. Didn’t realize they were all available as modules. I’ll give it a go within Orac!

Thanks again for your amazing amazing work.

Just got an Organelle M a few months ago, and loving Orac, thanks!

I am using this project as my entrypoint to learn PureData.

My goal is to extend modules/utility/clock to allow syncing with an external sequencer.

For example: let’s say I want my clock controlled by Ableton (or my Beatstep Pro), it would be cool if a 250 MIDI message started Orac’s clock, and a 252 message stopped the clock.

So, similar to Ableton, this functionality could be toggled via a “MIDI Sync Ext” flag within the clock utilities UI.

To my surprise, it wasn’t too hard to achieve this! I extended the mainmetro module, pattern matched over the 252 message to send a stop message to the metro.

So my problem is this: the first time I hit the “Play” button from Ableton, the MIDI notes are in sync, however all subsequent start/stops are not in sync. It looks like mainmetro already resets the master-ticks to 0 on a 250 message, so I am not sure what else I am missing. If anyone could help me do some digging here, it would be much appreciated!

I’m also curious to see if this is already a solved problem – and if I am going about it the wrong way, ha!

Welcome, glad you like orac and great to see you diffing in

Ok, so I wanted also to add the sync in 2.0 but, as you have found, the issue is deeper than just the clock
The real issue is each sequencer is maintaining its own counters on ‘position’ , and how they do this varies from sequencer to sequencer - often tied up to their state.

What I need to add is a stop message , which then will stop it - but this has to be carefully translated into the internal state of seq2, which might then need to do a number of other things

… what this means is every sequencer needs to be gone thru, and depending on it’s implementation updated, and what I found was every sequencer handled things differently.
To the extent I started to wonder if I might be better to come up with a more unified approach (*) for sequencers - then sit the current sequencers on top of that.

But that was a bit more than I had time for in 2.0 hence I stopped work in it.

So unfortunately no quick fix, it needs changes in every sequencer

But to end on positive note… the reason I was looking into this was doing so would mean multiple sequencers in different chains within orac would be in sync - which would be very cool.
( as well as external sync)

(*) id been considering this for a while anyway,
I’d actually like to move all the sequencers over to approach that was is more in line with ‘Ableton link’ rather than ticks - this has the advantage of being able to sync on the fly eg at bar/beat level
This makes a lot sense in a modular settings!

Thanks for your reply - I figured there had been some prior thought regarding sync.

I think I will try and get the clock+euclid sequencer to work with this approach. As this is the sequencer I want ‘synced’.

If I make any progress here, I can share my updated clock/euclid modules

And yes, Ableton Link would be a good fit here, especially if the Organelle (or the PD bindings into the Ableton Link library) are using the most recent version of the API, as there are start/stop callbacks, which I imagine would be very useful.

I’ve been searching the thread here and watching various videos, but I have not found a guide to updating Orac 1.0 modules to 2.0 modules.

Is there a guide (or collection of tips) for this?

It’s really easy to do (for simple module at least).
Just open a « factory » module from orac 1, and one from orac 2 and compare.
In fact you have principally to delete things !

as @TonyLB says, its just a matter of deleting things (*) , in particular the KontrolModule used to be inside the module, now it’s not needed (and will cause ‘conflicts’)

most other ‘changes’ are actually optional additions e.g. you can now get access to samples from a sample directory (see any module using samples) , and save module data along with preset (e.g. a sequencer can save its current sequence see seq 2 as example)

(*) the reason is, Orac 2.0 now requires no ‘boilerplate’ code in the module, which obviously makes them easier to write

Anyone experienced presets not saving? I just get these messages when I tried to update/save new-18. then I tried to simply make it a new preset (new-21). It seems like no presets can be added or overwritten. 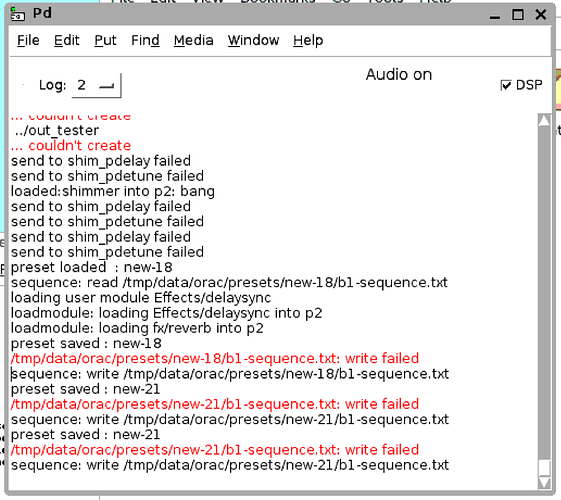 Any help would be awesome

Update - For anyone with the same problem, reinstalling orac fixed it, and it seems like you can just move your presets back in to the data folder.

I hava a Similar Problem. If I create a new Preset on the Organelle and Click safe It’s all gone when I reopen Orac.

The only time I get something similar is when there is a mixup in the number of presets in the folder and the preset name. If I mess with the presets folder (like remove some presets), then Orac tries to save a new preset, say ‘new-19’, but there is already a ‘new-19’ folder, it will fail to save new one. How many presets are in your presets folder? Did you add / remove / rename any?

sorry, hectic times here with visitors and other projects.

@oatsincoats … hmm odd, issue
esp. the new-18, where it seems to have successfully read the new-18/b1-sequence.txt, bu then not be able to write to it?!

if it happens again, or you can reproduce let me know, … Im wondering if for some reason the permissions on the preset data files are somehow becoming incorrect?

as @oweno says, the only ‘known issue’ I know of is if you start renaming/deleting things in the presets folder whist Orac is running - this happens because Orac determines what presets are called/available when it starts up.

@dom are you doing Save Preset, or Save?
Save only saves which preset is loaded at startup, it does NOT save the preset.

this was done for flexibility - but it appears to be a common confusion, which Im going to change in the next release. i.e. from next release Save on the main menu will save the current preset AND save which preset is loaded at startup.

Thanks for the information both of you!

It Could be that I accidentally changed something preset related when i used vnc and orac. I was recently working on a module around that time so it could be that. I’ll keep you updated if It happens again, but thanks for the info!

I accidentally deleted the kit-1,2,3 in the Orac media folder. I tried to put them back again, but now when I record in overloop, the organelle freezes. and other(most off) times when i try to start orac the screen just goes black and it looks like it turns off (its not) Any suggestions?

My first instinct would be to delete and reinstall Orac. Backup any custom presets first, of course

Thx for reply keston, but I have already tried reinstalling it and the same thing is happening. The new zop file don’t remove itself either

you would need to delete the media/samples folder before reinstalling.
as reinstalling does not overwrite existing samples or presets

id be surprised if the organelle freezes due to this… its most likely the patch is ‘crashing’ for some reason - possibly due to a corrupt sample file?

but im not sure that the underlying cause is, you’d need to get me the logs…
(if you restart mother from the command line and then restart orac you will see a lot of output on the console)

Oh man, these samples are so tasty! Thank you for making them. Could you explain or point me in the direction of a more detailed explanation of how to add new samples or kits? I’m brand new to Orac and don’t want to mess up the file system or anything! Thanks for your help.