I’ve been working for a while on a custom ORAC for the organelle which will improve its workflow into a more “streamlined” Groovebox/Multieffect unit.

Here is a list of some of the features:

All of this is already working and currently being tested (and let me say it’s quite fun!), it just needs some polish prior to release, also there is some more stuff on my list…

In the coming weeks I’ll try to put together some video tutorial & documentation to explain better how the patch operate, it is not an ORAC patch per se but rather a modified ORAC due to the various changes to the router module and to some extent the mother.pd patch.

After the documentation is done I will release the patch to the organelle community in hope that will be as useful and fun for others as it’s been for me.

You will find all the credits in the documentation.

I want to make clear that this is not intended to be an ORAC update or an alternative to it, but it’s rather a custom adaptation of ORAC made to make my workflow fit better on the Organelle which I hope might be useful to other people with similar taste for workflow as me.

Also to note that I’ve decided to name the patch momentarily “ORHACK” because it sounded fun to me, but I’ve not requested @thetechnobear nulla osta on this name and I’ll be more than happy to rename it (maybe with some suggestion by the community) in case he finds it as not appropriate.

Wow. Absolutely crazy. Do you know about how well this functions on a normal Organelle M/S? I know you are running a modified overclocked Organelle but this is very tempting of a proposition to void my warranty… I would love to help do some beta testing for this.

Another thing, do you think we could see some of those new changes to the LFO implemented in normal Orac or has it been tampered with extensively and won’t fit nicely?

Sure would be awesome if you could help me especially with the documentation as I’m no native english speaker and I’m still struggling with the language barrier!

But yeah sure, maybe we can get in touch.

It will works for sure on standard Organelle M & S, but obviously you might face some limitation, on my organelle with a mild overclock i can fill every module without drops, the drum machine has 8 instances of Plaits already and I can load much more instances plus clouds and a reverb, a stereo delay, the gen-loss effect and 2 bus comps without drops, all of this with 4x LFO’s and 4x random-sync running… I might have to check how it performs without the OC.

As I said I will create some simple video tutorials and some content to show what this patch is capable of.
I’ll do it in the coming weeks in my spare time.

Here is a little simplyfied overview of the chains: 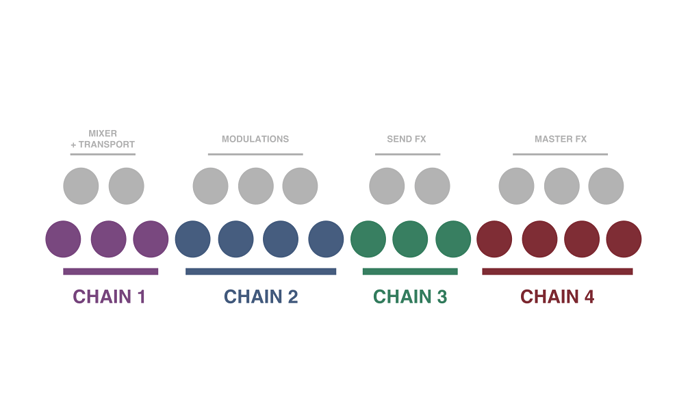 Amazing. My PMs are open and I’m willing to help contribute in what way I can.

PS: I think that the new LFO improvements will work on normal ORAC provided you use the new LFO, RANDOM and MORPHER modules!

Will the mod unlearn fix work in normal Orac?

Yes I’m 99% confident it will, the new learn/unlearn is a breeze you can map multiple paramenters to a single LFO easily as now when in “learn state” it discards the 0 modulation point (which unlearns the modulation an cause confusion), in the “unlearn state” the 0 modulation point is forced into the selected modulation slot (let’s say LFO1) all the other modulations are hidden momentarely and focus is on the selected modulation source, the same focus happens in “learn state”, all is done with a press or a prolonged press of the aux button guided by LED light’s flashing and color coding… I will explain this better in the introduction video!

Id be interested in the technical side of the changes…
I’m guessing this is all on the pure data side?

(this would be a good thing, as frankly, I spent so much time on the C++ side of Orac, sometimes the PD side got a little neglected

I’m totally fine with name (or whatever), my only request is that its continues to be open source, and refers back to its origins - which really is just ‘respecting’ the GPL license, that I published Orac under.
apart from that open source is there to be shared and improved (and thats the point of the GPL)

Most of the modules are either mild or deep modification of already existing patches made by @WyrdAl, @T8R @electrafa, @thetechnobear and Critter&Guitari.

This sounds really cool! Yeah, really interested to see how this all works. Do regular Orac modules work in this new setup, or would they need modification?

This sounds awesome, would love to try it out. Let me know if if there are any fixes/improvements to my modules that would help.

Thanks a lot to all of you for support!

@thetechnobear
yes it will definitely remain open source, and yes all the modifications are within the PD environment, actually the deepest change is to the “router” module and JSON file to redefine the structure of the chains, the fx sends and whatnot…

@oweno
All the original ORAC patches will work without modifications! Except for modulation modules which should be made with the new learn/unlearn logic in mind in order to work properly with it.

@WyrdAl
New and old sequencers should be accomodated with the 10 patterns structure and transport “start/reset” functionality, the main thing I wanted to accomplish was to have the ability to perform a song inside a preset and avoid all the problems of glitches happening by changing presets.
So now you can build a song with 10 patterns all controlled globally by the transport module, and the Morpher module will help a lot with transitions!

This is huge! Can’t wait for that!!! I am playing a show where I am also using the Organelle with ORAC next month, but that would certainly make everything easier. Is there a release date yet?

For the release I’d say mid Genuary, but take it with a pinch of salt.

these last few days I’ve worked on integrating the multitrack recorder which will record 32bit stereo wav files (chain-a, chain-b, chain-c, chain-d, send-fx or the entire master chain) you can choose whether you want multitrack recording or just the master.

It will allow us to perform a track live then take the recorded stems and shove them in our DAW of choice for easier editing, mixing, mastering…

I’ve also managed to make the midi looper (based on “sequences”) behave the way I needed, but there’s more work to do on it’s pattern saving functionality.

Project is advancing and it’s almost release ready, but then I’ll need some time to make the documentation and some video content, those are essential!

I just got my organelle a few days ago, and I must say I’m blown away by the community! I found this thread after searching for a mod matrix for orac… And this is absolutely crazy!! Let me know if you need a beta tester, can’t wait!
Thanks a lot for doing this

Is any of the code on github at this point? Especially interested in the changes to the LFO etc.
Best wishes,
Valdemar

Is it possible install ORAC and ORHACK in the same machine? It would be nice to be able to choose the flavor of orac without having to install or uninstall.

Thanks for your work @Audivit , I love the @thetechnobear patch.

yes it is possible!

Video introduction is out now! 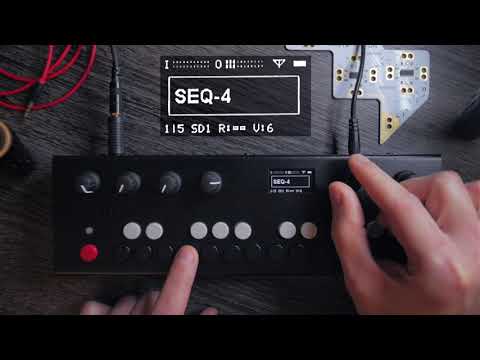 Super excited! I can’t wait! Lots of powerful stuff already showcased in this alpha version. I would like to see how you deal with modulation unlearning specifically in the next video you put out because that is probably Orac’s biggest problem at the moment and it would be good to see how you have addressed that with the new modulation system. Overdrum + Morpher look like absolute game changers