As I familiarize myself with orac, I am wondering if there is text documentation anywhere for sends and receives for messages having to do with module page changes, and/or module view changes?

Specifically, how can I know when to clear anything I may have written to [s auxLine] while inside of a module?

I don’t think there is any text documentation besides what you can find on the forum or @thetechnobear videos. You can update the screen by getting r activePage which you can unpack into the name of the module slot that is occupied, like s1, s2, a1, etc, and the ability to check which page is active to load certain graphical elements on a per page basis.

This example below is an abstraction I have in my program Loopy that turns on rendering level meters when the encoder is turned to the level page (pg_levels). Similar abstractions are used to update the clock on the Recording page (calling the recording page would be pg_rec) or no updating on other pages. 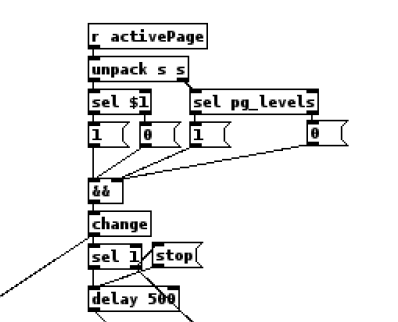 Don’t know if this is exactly what you’re looking for. Another aspect that is important is to include $1’s (which is just the name of the module slot the module is in) at the end of your sends and receives so you can have multiple instances of patches and not have crosstalk between two objects both such a rate control in a chorus, but instead those could be contained in rate-b2 and rate-a3.

Hope that was helpful

Absolutely! Thank you. I actually came here to say that I had found the answer by looking at the “utlities/empty” module.

Which brings me to my next question, which is do you know what the arguments are for “/oled/gPringLn”?

I think it prints a ghost line to the screen for spacing in the empty script? I don’t know for sure to be 100% honest as graphics and custom UI are not something I’m great at lol

Check this patch out it explains the graphics part which are those lines like “/oled/gPrinln” “/oled/gBox” etc.

auxLine and screenLine are an alternative for accessing the screen lines, mainly for static messages if I’m not mistaken.