I would love a loop on/off toggle in this patch too and asked about it previously. I was told to look for pointers on the way looping was handled in Loop Jam Record but I looked and it didn’t clarify anything for me. I may have another look in sampler24 and just try to break things until it stops looping. Could be good to just google ‘one shot sampler pure data’ and compare the two. Let’s consider it a joint effort.

thank you, i’ll try to find the difference in other one shot sampler projects. will let you know if it will work.

Had an idea yesterday that Polybeats or any of the sequencers with velocity, could be converted in orac to make a really powerful syncable CC sequencer for external music gear/ETC/(othermodules?)

Instead of sending velocity 0-127 it could send the same value as a CC message. I’m in two minds whether it would better to have a choice of different cc for each and every of the 24 keys, or just have it something like this -
Knob 1: Oct 1 CC#
Knob 2: Oct 2 CC#
Knob 3: Edit Lock

This is feasible right?

F-constantgardener.zip (10.8 KB) F-collapser.zip (29.1 KB) Here they are. ‘Collapser’ still has this issue of ‘dressing to the left’ anytime the Stereo pan depth is set to less that 100%. Maybe someone can help.

Okay heres a beta of my key triggered reverb module collapser. Best used with a sequencer of some sort ahead of it in a chain.(eg polybeats) (also great with lfo delay ahead of it in tandem)
1st Octave controls panning of the wet signal L to R, 2nd Octave controls D/W scale. It also has an LFO page for the reverb size.
Im really pleased with this! Not hugely complicated but i love the effect of the panning and expanding/collapsing reverb.
There are issues i think with the panning depth parameter, maybe someone could give me some pointers?

Hey I took a look at this and I think I see an issue.
It’s not very intuitive but most math functions will only send out a new value when they get a message in their first inlet.
So these multiples will only update when the parameters change, not when notes come in. 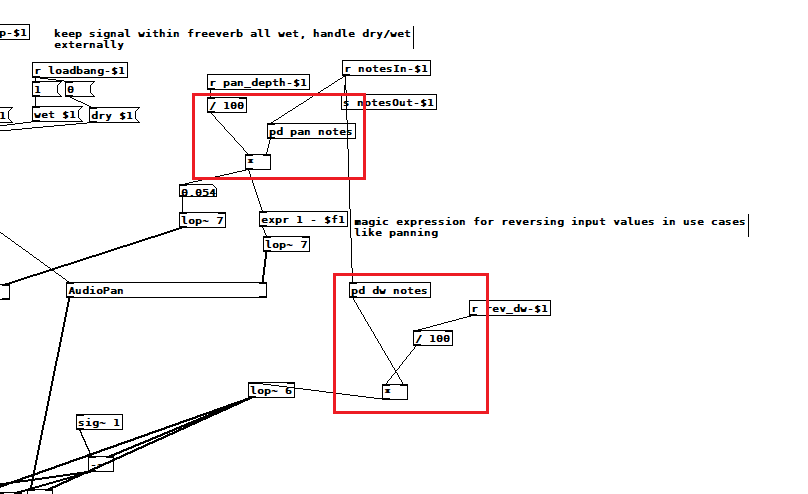 pd.png808×494 7.92 KB
To fix this I would use the trigger/t object to send the value to the second inlet, then resend the old value to the first inlet like this: 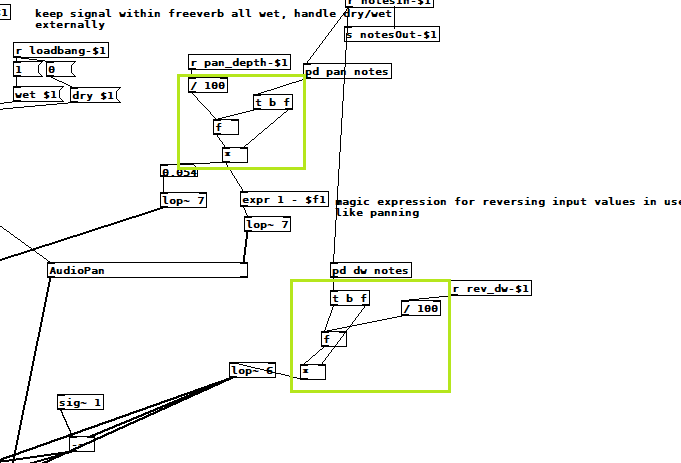 Still having issues with the panning depth parameter even after changes. It seems to favour the left channel if it at a position other that 100% for some reason. I’ll repost later.
In other news I’ve got c&g’s new ‘constant gardener’ in Orac too and it seems to be working perfectly in mono with a bit of extra glissando control thrown in. Seems quite likely that it would work as a polyphonic patch too as it doesn’t stretch the cpu.

‘Collapser’ still has this issue of ‘dressing to the left’ anytime the Stereo pan depth is set to less that 100%. Maybe someone can help.

I think the issue is that the value to the panner module takes 0-1, and 0.5 is the center.
Since you scale the value from 0-1 when the depth is less than 1 it can only go from full left to the depth value (so possibly only left).
I think subtracting 0.5 from the value, then scaling, then adding 0.5 back will give you the right values.

Hey just a quick note on this S-sampler24-24 (took me a minute to figure this out, so hoping it may save others some head-scratching time

) samples for this act a bit strange (seems as though they start from the middle of the audio file) if made to be more than one second or so. I’m guessing likely to do with the nature of the original module only being able to hold a certain total amount of seconds (which is fine really, as there are plenty of other samplers avail for longer sounds).

Can’t believe I haven’t already thanked you for this. Finally finished it! Thanks for your help man

Is this the orac christmas list? I know it is possible to adjust output gain of individual chains in the master module (midi learn is so usefull!), but I really would enjoy a “mixer” module, making use of the 4 knobs for controlling the output of the 4 (maximum) chains allowed in Orac. My 2 cents of an non-pure data person.

the router is kind of the mixer…

but this is one of the things Im kind of struggling with for the next release
I recognise that what we need in Orac is a really fast way to alter gain levels of modules and chains.
in a similar way to DAWs which whilst they things on ‘tracks’ , they have immediate control of levels.

the issue (and what Ive been “struggling” with), is this kind of goes against the modular nature,
the routers are ‘just another module’ in orac, and this brings many benefits. but also prevents them from any kind of special handling.
so Im still trying to decide on how to do this nicely.
(I don’t mean from a UI perspective, that I kind of know what I want to do - rather from a programming architecture/design point of view)

absolutely, you can use midi learn to control any of the routers parameters…

an interesting aspect of this, is you can easily create your own router modules too…
so you could , completely change how the gain/mixer is organised in your own router module
or even , it would be trivial for someone to move the parameters around on to different pages , if they believe there is a better organisation.

in the next release, Ive made the router module implementations much easier to ‘read’ , as I recognise they are perhaps a bit ‘daunting’ in the current release

Very interesting. Its true that a special module is maybe unnecessary if there is an easier access to these parameters. How about an aux+encoders combo in router module? Anyway, I assigned the output gains to the pyramid encoders, so I wouldn’t use it that much in the end.

a cc lock knob position module, functionning as a snapshot, kind of a « preset ».

somehow like the snapshot function on the faderox pc 12, but more « presets » oriented.

each wooden key would be a « preset ». toggling wooden keys on the fly would change the presets.

aux could be used as a change bank function : bank 1 would be the first wooden key ont he left, etc …