Automate your EYESY visuals with an Organelle with MIDI! 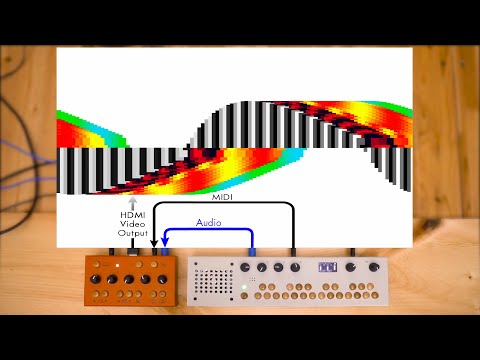 Patch Info:
CCquencer2 for Organelle automates EYESY video synth mode control via MIDI. Organelle Knobs 1-4 and the Vol knob are mapped to the five knobs of the EYESY as MIDI CCs. Organelle knob adjustments, key presses, and EYESY ‘Persist’ setting, can be recorded, looped, overdubbed, and sent to EYESY where the current EYESY mode will respond accordingly. Requires that the Organelle and EYESY are connected via MIDI either via EYESY’s USB-MIDI or TRS-MIDI input.

The keys are set to synthesize audio at frequencies that look ‘good’ when displayed in a EYESY oscilloscope (‘Scope’) mode. A given key’s frequency will be close to ‘frozen’ or alternate in an interesting way when displayed. This requires that the Organelle’s audio output to be connected to EYESY audio input. Change the waveform for visual variety.

HOW DO I USE THIS PATCH?
A typical use case would be:

To do steps 2 & 3 above you will need to use the ‘Aux Menu’. The Aux Button controls the ‘Aux Menu’. When you press Aux for 0.2 seconds, a new menu is displayed on OLED Screen for as long as you hold Aux. To select an Aux Menu command/Page, use the Top Row of Organelle keys. There are 10 possible commands selected by the 10 keys. The low C# key selects Top Left command. The High A# key selects the Bottom Right command. The Command Grid is to be read from top left to bottom, then top right to bottom.

The following commands are available on the Aux Menu’s Right Column:

The following commands are available on the Aux Menu’s Left Column:

The Bottom Row of keys selects one of 14 Sequence ‘slots’ to record sequences to. Changing sequence slot will change the number that precedes the command in the left column.

When recording a sequence, you can record adjustments to the knobs!

Does it work with an organelle 2019 with MIDI over USB as well?

Really great work, thanks for updating this patch, it’s so good to have a solution to automating the Eyesy that’s within the C&G ecosystem.

Does it work with an organelle 2019 with MIDI over USB as well?

Yes the patch runs on the original Organelle (no speaker, no battery power).