i did a live stream with the EYESY, wanted to share with you guys! still more to learn but it came out pretty nice i think kidkanevil - live from home - YouTube

hope some of you enjoy it, any feedback welcome! kidk

Really nice use of the Eyesy, I thought you matched the scenes and music really well.

What was your set up in terms of how audio and midi were connected?

Did you have a planned out selection of Eyesy scenes or was it more improvised?

using ableton n a focusrite i sent 1/2 to monitors so i could hear myself and 3/4 i sent to the eyesy audio in. i sent a different balance to the eyesy with the drums more dominant in the mix and also with extra transients added as the visuals responded better like that. midi i sent from the interface, i had clips in ableton set to send midi commands alongside when i would launch certain musical clips so it would change to the next scene with the next track. i also had a pad on the mpd mapped to switch the persist toggle. i plan to experiment using the mpd nobs to also control the effect parameters. that was it really! hardest bit was finding a midi type A cable that was really a midi type A cable! plus a cat for vibes. attached a pic, should make sense… 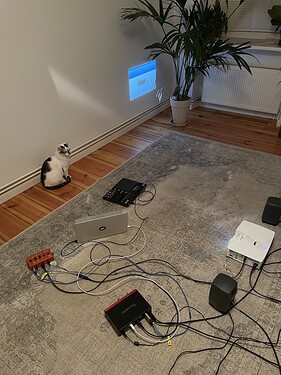 i made 1 or 2 eyesy scenes for each track yeah. once each track has a visual that works i can improvise the musical performance however i want and in theory the visuals should work. i planned the set out this time though just cos i didn’t wanna mess up when streaming lol.