I’m running into an odd issue and hoping someone can help.
Every preset i’ve created has used multicycle as the engine in S2. However i’m trying to experiment without it but for some reason I cannot make S2 empty without freezing the Organelle M.
I’ve also tried creating an empty preset by editing the params.json file so all the chains are empty (see attached zip params.zip (310 Bytes) however when I boot orac onto the empty preset it instantly freezes as well.

Anyone have any clever suggestions?
Have about 30 presets that all use the multicycle and are used for my band’s set up so it would be a headache of note to start from scratch again.

What exactly is the freezing behavior you are seeing, does the Organelle actually stop responding?
The multicycle module replaces the clock, so you would need to swap it with a clock module in order for any tempo based modules to function.

It basically freezes / locks up. Can’t change anything and the encoder doesn’t work. Tried replacing with a clock module and the same thing happens. If there’s something I’ve changed by accident I can send an image of the file?

Could it be changing multicycle is overloading cpu somehow?

Hmm I just tried replacing multicycle with a clock module locally and I’m not seeing a freeze. Possibly only happens on the Organelle-M?
Are you using the latest version from here?:

Heres a new beta release (will probably be final unless any issues are discovered) It now has an ‘Armed Recording’ mode, which works morel like seq2, and is easier to use if you are not using an external MIDI keyboard (its enabled on the third page). If enabled, instead of aux + the lower keys capturing the LAST played notes, they will arm the track (represented by the letter A). Once a new note is played the sequence will start recording (represented by the letter R) and automatically stop …

If you post a preset that freezes when multicycle is replaced I might be able to see the issue.

Hey, sorry it took so long to reply. So it looks I’ve been using the beta 3 as I’ve always been using the armed recording mode. However I tried removing and reinstalling which worked but when I try and swap it still freezes dead without anything playing when i do try swap. I do see
sd card/ media / orac / usermodules / system / multicycle has the same files as
sd card / media / orac / usermodules / utility / multicycle (this is where I’ve been keeping and using multicycle for s2).
Have I accidentally made that an error?
mutinstr-2b.zip (3.1 KB) a preset example

Realised you’re the same person as the other topic sorry for post jumping.
So I sorted out the freezing issue, really not sure why that happened but all good.

I have, for now, one final issue I could use your help with.

I have an Arturia MIcrofreak (I’ve seen a few posts but don’t think this has the same issue).
Using the multicycle as S2 and sending midi notes into the microfreak works like a charm. However the second I use the Arturias sequencer/arpeggiator there’s a clash between the two for midi clock (BPM jumps around from 100 - 5000)

I’ve tried every combination of midi settings on both organelle and microfreak but am getting very inconsistent results. By the way trying to run this through usb only for time being as I don’t have enough trs to 5 pin midi at moment.

Microfreak // Sync
Source: USB
clock: 24ppq (can be 48ppq depends on which clock module is used for S1. I tried switching between the two but it made no difference).

With these settings I can send midi notes and play the arp/sequencer on the microfreak (without any issues from bpm) if I use the normal clock module that comes with Orac 2.

what I find so strange is that I got it to work once yesterday after trying for ages but now when I manage to get it to work now with multicycle it’ll work briefly if I’m lucky before it descends to madness.

If you have any ideas that would be incredible.

Sorry I didn’t get to your previous issue, glad it worked out though.

I think I get what is happening with the microfreak. The “Midi In” on multicycle only effects incoming notes. “Midi In” on the default clock module disables syncing to external clock, I think I just overlooked putting an option for that into multicycle. I have a couple other unreleased updates, possibly I’ll release an update in the next bit that includes that.

I think you might be able to work around it currently if you use the Microfreak as the master clock and disable clock send from multicycle. I think you can just set “Midi Out” on Multicyle to off and set the tempo from the Microfreak (the microfreak sequencer might need to be running for midicycle to work though).

Interesring, I sadly won’t be able to try this until after Christmas but I look forward to trying that out.

That’s exciting to hear that this sounds like it could be an easyish fix? If I go into pure data would i be able to to edit the midi setting if you kindly point what needs to changed? As I’m very keen on getting the organelle to be the master and to send sequences so I can play microfreak simultaneously.

If you do release a new multicycle would I be able to save all of my multicycle recordings that are stored in the different orac presets?

Also if you do have some updates, is there a possibility to show where the current beat of the loop is?
So if the loop is 14 bars in the corner it would count 1 - 14 if that makes sense? Sometimes if you record a part that isn’t aligned with everything else perfectly, triggering it sometimes starts on a different beat. Normally it works like a charm, just gets a little tricky if I don’t pay attention.

But in general I seriously can’t thank you enough for how powerful this patch is.

Hope your Christmas and New Years is a good one.

The update I’m planning on releasing would unfortunately not be compatible with old sequences (it increases the precision of sequences from 24 ticks per beat to 96).

I’ll think about adding some visual feedback for loop points for a future version.
Have a happy holidays!

That worked!!! You’ve made christmas that much sweeter. Thank you so much.
Thats all good regarding the new release, excited for a super precise sequencer.

Happy holidays to you too and thank you again.

I’ve been dealing with the same issue, was unable to swap the multicycle module without causing PD to crash, also sending ableton LINK was causing the same crash.

I’ve tracked this down to:

the issue disappears whenever the stock ORAC “clock” module is loaded prior to loading multicycle on the same slot.

I will try to further investigate on this issue, any help would be really welcome!

Sorry you are having this issue, I tried loading multicycle in the startup patch and still cant reproduce it on my end. Which version of the organelle are you using? I only have access to the OG.
I wonder if ableton link could be causing both issues. Is there an ableton link session running? Maybe try turning off WIFI and see if that helps.

You can also try replacing swapping out multicycle with my latest version and see if you still get crashes (this supports much finer resolution, but doesn’t load older sequences).
multicycle_dev4.zip (921.3 KB)

If that doesn’t work, if you are able to connect to a terminal using ssh or HDMI you may be able to get more diagnostic info. Let know if you would like instructions on doing this.

Thanks a lot for your help!
I’m using Organelle S, Firmware 4.1.

The issue persist even when WIFI is disabled, in that case the crash can be reproduced by swapping the multicycle module with another one like clock.

For now my workaround has been to make an Init preset with clock on S2 module and remove write permissions to this preset and also to the file “rack.json” in “/data/orac/”.

I will try your last version soon!

(I’m pretty excited to do so as I absolutely love what you are doing and what you’ve already made for ORAC your patches really do stand out for quality but also for workflow, can’t thank you enough especially for multicycle!)

I’ve just tried your last version and the mystery is thickening, not only the issue persist but also this new version doesn’t behave properly.

When I try to record a new sequence on a new blank preset, it only plays back quarter notes and the quantize parameter doesn’t seem to work.

Hmm, those new problems are probably just a bug introduced with some new changes (its not as well tested as the previous beta releases). Probably best to switch to the last version if the old issue is still there.

I don’t think there is a log of the crash made automatically, but if you ssh/vnc in or connect with hdmi and run “~/scripts/restart-mother.sh” you should see the output of puredata. If you can recreate the crash there might be some useful info printed out.

Awesome that’s what I was looking for! Gonna check that and report back if I find anything useful.

Ok I’ve tried running “~/scripts/restart-mother.sh” and while it didn’t print anything when replicating the crash by sending in ableton LINK,

It did print this when replicating the crash by swapping the module: 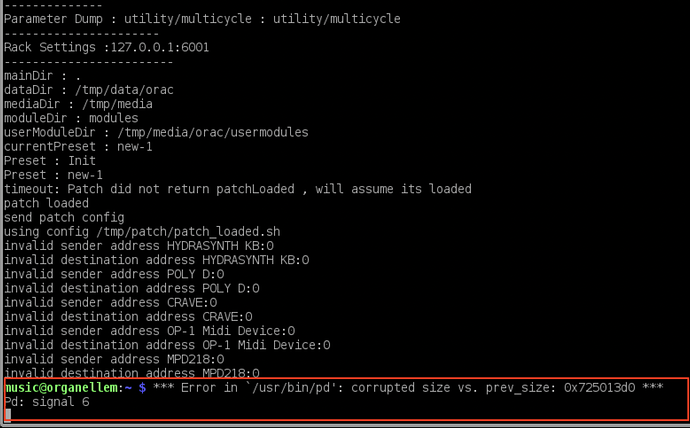 Which raise some concerns as I have previously replaced the SD Card with a larger one, following this procedure provided by @rupa in another post.

Could that be the culprit? Would be strange 'cause since then I’ve been using and abusing the organelle and never had any other issue…

Although a quick search about that error seems to point at an issue with memory allocation in C & C++ code, but I don’t have any experience with that so unfortunately I can’t investigate further.

Probably not related to your SD card! Looks like an issue with an external (probably multicycle, but the patches also use the ableton link one).
Could you try doing the swap using this module instead? It doesn’t use the multicycle external so might help narrow down where the crash is.
clockswing.zip (1.4 MB)

And indeed it still crashes, so looks like we can take multicycle out of the equation!

Great news! Thank you for all the testing.
I had included the ableton link external with the module, I now see that the default clock module doesn’t include it and must be finding it elsewhere (not 100% sure where though) so mine could be conflicting with the one on the organelle m/s.
Here is a version without the external included:
multicycle_beta3_a.zip (1.9 MB)
If that doesn’t work hopefully this version where I’ve removed link entirely will work:
multicycle_beta3_b.zip (1.9 MB)