I’m new to all these wires and connections - mine are all crossed right now and I’m not making any progress here on my own.

I’d like to use an Organelle to control an 0-coast. It seems like it should be pretty straightforward but maybe I’m not even starting in the right place.

I think I have the right cables… So far, I’ve connected the devices with grounded TRS cables and TRS midi-adapter cables with 5-pin midi cable in between. Either way there was no sound output. I don’t have a midi-hub so I can’t test this connection, but I’m also not sure that would solve the problem anyways.

After an afternoon trying various arrangements of cables and settings tinkering to no effect, I’m wondering if I actually understand how midi functions at all. Maybe someone could recommend a basic introduction?

The most I’ve been able to do so far is use the Organelle as an effects processor for the 0-Coast. That’s interesting but has it’s limits. I feel like the pairing could produce more interesting results if I could send midi from the 0-Coast to the Organelle (or do I have the backwards?).

Any advice, orientation, or research resources would be very much helpful. Thank you!

Maybe someone could recommend a basic introduction?

this page explains the MIDI mini TRS connections. Basically you need to connect mini TRS cable from MIDI Out of Organelle to MIDI In of 0Coast. Mini TRS cable is a fancy way to say any stereo cable with mini jacks. After that you have to make sure that both instruments are on the same MIDI channel.

It’s not you, it’s the synth manufactures. 10y ago everybody used DIN jacks and MIDI was simple (well errr simpler). Now I have 5 different MIDI standards in my tiny studio space and I have to be the wizzard to know what works with which cable.

Welcome to the forum.

I think I have the right cables… So far, I’ve connected the devices with grounded TRS cable

Thanks! That’s a helpful resource. I think I’ve got all the cables going to the right places now.

feel like the pairing could produce more interesting results if I could send midi from the 0-Coast to the Organelle (or do I have the backwards?).

Just to clarify: 0-Cost is a great synth but it’s not able to send MIDI out. The MIDI signal chain can only start from Organelle and (in this particular case) end with 0-Coast. And as @chrisk also mentioned: MIDI out has to be enabled on Organelle and also MIDI input has to be enabled on 0-Coast. And both devices have to be on the same MIDI channel. Yeah, it can be a hassle first time but I’m sure you can manage.

It seems like I’ve basically figured out how to use the organlle keys to play notes from the 0-coast. They are divided harmonically into a scale, but I can’t really control the range of pitch. Also none of the patches seem to have an effect on the sound. The arp patch kind of garbles things a bit but isn’t really functional in the normal way. It seems like most of the organelles functionality is inaccessible with this setup.

I have the organelle sending midi out to the 0-coast right now. This arrangement seems pretty limited - none of the patches I’ve experimented with so far actually engage with the sound produced on the 0-coast. The arp patch has some effect but doesn’t seem to have much functionality. I guess this is because the chain terminates in the 0-coast and those patches only modulate (term?) information produced from the organelle? I was hoping to play the 0-coast with midi on the organlle and put it in a chain on orac so I could apply effects, sequence, and so on. Is that possible?

I’m starting to get a bit of orientation here. Thanks for your help!

I would say there are two main benefits for MIDI synchronisation of two electronic instruments. First and foremost - you can share the same clock and that’s huge because you can synchronise LFOs, time effects (delays), envelope retrigs, sequencers etc. All of this can be used for sound design and developing of more elaborate patches. If I remember correctly, 0-Coast has 2 LFOs that can be MIDI clocked.
The second benefit is to use the keyboard instrument to play the non-keyboard instrument, in your case Organelle to play 0-Coast. I’m not entirely sure if you can route the sound into Organelle but that would also be neat for adding additional effects. 0-Coast has this somewhat dry/woody character that will evolve with a touch of a lush delay. The other simple trick is to use some granular effect, similar to Mutable Instruments Clouds that also can create interesting evolving sound, especially if you modulate the Overtone and Multiply circuits.
I would think all of this requires some trial-and-error and learning how the patches work in Organelle. Have fun!

The new Quilt patch can send MIDI out and then effect the audio coming from downstream MIDI devices.

Here’s a demo of Quilt showing it controlling an external synth via MIDI and then processing the sound it generates. Super easy synchronization! [Critter & Guitari - Quilt + Chords Roll] 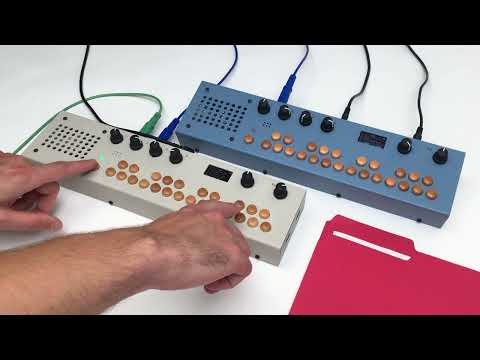