This is sounding cool. It is nice to have an install path that doesn’t require WiFi. Another option might be the shell object that is part of Pd-extended (you can download it compiled for Organelle here). I was experimenting with it once to make an ‘installer’ patch that would install some extra OS stuff. So in this case you could have an ‘Install Monome’ patch that would have all the resources and a shell script for putting them in the correct places.

Also a side note, do you know about this https://etcher.io/ for burning SD card images? It is cool because people can use it to write SD card images who might not be comfortable doing so on the command line.

The Installer patch is a great idea! I’ll give that a shot.

Thanks @oweno, the Installer patch idea is a really cool solution. I just bundled all the binaries and scripts and made a little installer that displays its progress on the OLED.

Run the “Monome-Install” patch first. Start the install by pressing AUX. If it installs correctly, the Monome should blink and each key should illuminate when pressed. The “Monome Basic Poly” patch should play sound.

ooh. i really like what you’ve done to make setup scripts. i’m going to try this method soon.

Interesting about the “freeze”. If it does that again, plug in a Monitor and start the gui, and see if there are any errors in the PD console.

hey-o! so glad you got it connected! this project is getting me more and more GASsy.

any updates on functional success? 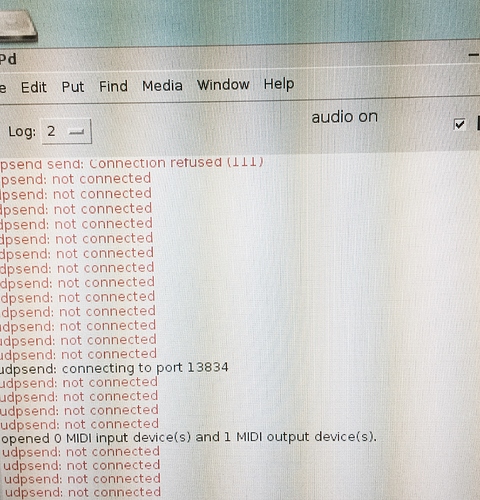 That happens to me sometimes as well. I think it’s when serialosc isn’t shut down or started properly when switching between patches.

You may try going into serialosc.pd and restarting it by hitting the “reset” bang, that sometimes does it. I’m looking into a more robust way of killing it pkill serialosc doesn’t seem to work every time. You also may have to restart the PD, the GUI, or maybe the whole organelle if this happens (for now).

I’ve put my latest Monome patch up on PatchStorage. It’s a step-sequencer that also includes the Monome-Installer patch. The sequencer is based on the Monome Grid Studies, and I use the Organelle’s keys to program the arp notes. It also includes a basic polyphonic voice, derived from the stock Organelle patches, but I mostly use it to trigger Midi – I’m using it with my Moog Minitaur (which is monphonic), and routing its audio into the right channel of the Organelle so I can apply the delay effect.

I’m also experimenting with my own implementation of multiple pages via AUX, and presets. You can have any number of pages, and I link each page to the corresponding AUX Led light. I’m inspired by what I’ve seen other Organelle users doing, such as Rawticks Glass FM synth.

My design is a bit different – you long-press the AUX button to enter into "preset mode’, and then use the Organelle keys to save/recall presets. Here’s a screenshot of what the patch looks like.

As always, a work in progress! The Organelle and the Monome make an excellent pair. I’ve also been including my OP-1 in the mix, mostly for drums.

i got it working now too
https://octave.is/glia/reel-two

hi! this is very nice, great work! would a simple mlr pd version run on the organelle?

re: @glia YASSSSSS!!! Awesome. I love the vari-bright monome’s. I almost kinda want one.

But my grayscale is great. I wonder if I can convert it to vari-bright?

RE: @sno I don’t have Max/MSP installed currently (I’ve been living in PD full time), but there’s some foundation here if the community wants to start building patches on it. Should be possible if someone wants to dive in and patch it up!

Ultimately I would like the Serialosc daemon working so you can hot-plug monome(s) in, and you won’t get that occasional UDPSend error. Many improvements to make, and many possibilities.

thank you for you reply @quilime! i don’t have an organelle, but i’m thinking on buying one. i was asking mostly based on cpu and ram in the organelle. but thanks for the heads up about serialosc.

the simple answer to your question is yes

thanks for you answer @gila!

As far as CPU and RAM, it’s pretty capable – I haven’t had a issue yet as I’ve been mostly use my Organelle as a MIDI/OSC router/brain for external gear so far. Synthesis patches start taxing on the CPU but seems doing ok so far! PureData seems to be super powerful especially when optimized, like using [switch~] to turn on/off DSP that’s not in use.

@quilime do you think organelle and your patches will also work with a monome256-grid?? i’m also thinking of buying an organelle, but i‘m not so sure yet…

thanks in advance and for your effort!