Would this make a lot of present And previous user patches unusable without changes too, or just a few? Or is there something particular in the early c&g patches?

Yeah lets get that PD update, its like patching in the dark ages, using that ooooold version of PD. For the new versions, there are both 32 bit and 64 bit to choose from. I mean both could run on organelle right? So its mostly about backwards compatibility, I guess.

As @oweno said , only thing I found was an issue with sending out midi clock as the patch was starting - so it’s a small cahnge and quite specific.
3rd party patches might have this if they copied metro but can be easily fixed.

Of course not tested all other patches, but ones I’ve tried were ok on 48, and of course mine are fine

ok, so Ive got PD 0.49.0 compiled and running on my Organelle

a quick test indicate no issues with C&G patches or Orac, audio and midi seem fine.
(even incompatibility issue introduced in 48 seems to have been fixed

I need to do some more tests (on my vanilla organelle), to check that the CPU load has not increased, or anything else odd is happening either due to PD 0.49 or my build of it.
but so far its looking positive.

Ive provided the build to C&G so they can also take a look on a spare Organelle, and check they are happy with it.

I guess if tests are positive then we can :
a) release it as a package, either on the C&G website, or patchstorage (TBD)
b) later release as part of an OS update.

if we do (a) then if you use newer features of PD in a patch you’d have to let your users know.

note:
if you dont use new objects etc, e.g. you just use editing features, then a PD 0.49 patch should still run on the old PD e.g. I used PD 0.48 for all Orac development, despite the user’s organelle being on pd 0.46.7
so bearing this in mind, you can already use Pd 0.49 on your desktops (pc/mac) for the new editing features, I know i am

I guess we should also keep an eye on the PD dev lists, incase they decide to release a minor update, though its very quick/easy for me to rebuild an updated pd package if needed.

Thanks for pushing forward!! Fingers crossed for new stuff…

Just a big thanks you for all your amazing work on the Organelle OS and patches. Your work, and this community’s work, is one of the reasons I bought an Organelle to begin with.

Quick question: Its been a while since there have been an OS update and therefore and update of PD.
PD is now version 0.49.1 and has some nice new features. I know you’re not working for C&G but I thought you might have an inside scope on things to come?

Ive supplied a 0.49 build and it does look good… (I use it all the time without issue)

but really needs an OS release, as we don’t want to get into a situation where to get some patches working you have to do PD upgrade… it’ll be confusing to users.
(but saying you have to be on OS 3.5 (or whatever) would be ok, and we could even build this check into the patch)

But i agree its a useful upgrade, mainly because of the clone object which makes polyphonic patches much easier/flexible.

busy at the moment, but in a few weeks - I’ll compile it, and check compatibility etc
I’m mainly interest in the midi, scheduler and memory management changes.

however, its likely it will be better to wait for 0.50-1 or 2, let it settle down - as 0.49 seems very stable to me… and there are a few comments around, that things are a little incomplete in 0.50.
(besides ive got a whole load of change in 0.49 that i want to start getting into my patches!)

I was patching away on my mac, but when I transferred the patch to my Organelle-M I was missing the [slop~] object.

We should look into this for next OS update… The Organelle OS is old enough that you can’t just run an update to grab Pd 0.51, so you would have to build it from source. Not impossible but you might run into dependency problems. We have an experimental OS build based on the newer version of Debian (10 aka buster) and it looks like there is a backport package available for Pd 0.51. We can try this out and maybe post a beta disk image.

Awesome! Since it is pretty cheap and easy to just have a couple of cards it would be fantastic if you would post betas. We wouldn’t run to big of a risk of messing something up as we can just put it on a separate card.

Just curious - is that update planned for the original Organelle too ? ( An update from the older Arch ?)

@KristofferLislegaard we uplodaed a new disk image for the Organelle M. It is based on the newest Debian version and includes the latest Pd (0.51). You can burn it onto an SD card following the same instructions in the manual.

The first time it boots up it takes about a minute because it resizes the file system to match the size of the SD card. This is useful if you burn it onto a large SD card. Previously the disk image was static 8GB even if burned onto a larger card.

Just curious - is that update planned for the original Organelle too ? ( An update from the older Arch ?)

We don’t have plans to update the original Organelle right now. It is theoretically possible but would take a bunch of work to get everything up to date. (probably build new disk image from scratch would be the best way).

That is great news!

But I have a hickup. I burned the image to a new card with BalenaEtcher and it looks to have booted fine.
I got it on wifi and started VNC.
There is a folder called usbdrive which is the default patchfolder even if I have no usbdrive mounted. It has a folder called patches inside it that is impossible to edit. So I am unable to launch my own patches (on the sd card) on the Organelle itself.
I also tried running the script to make the system not read only, but that doesn’t seem to affect the usbdrive folder. So I am unable to add my own patches.

Am I doing something wrong or is this simply a bug with the new image?

Am I doing something wrong or is this simply a bug with the new image?

Ahh yeah, sounds like a bug. Removing everything in /usbdrive maybe will fix it. Does this work?

Removing everything in /usbdrive maybe will fix it. Does this work?

Yes that worked indeed! Now I can use it. Thanks for the quick fix

I guess you can just put it on the list 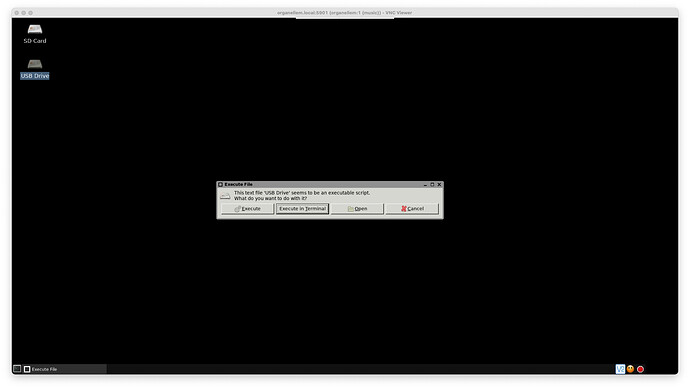 Edit: Deken seems to be not working.
Edit 2: It started working. Not totally sure what I did different, hehe!