Howdy,
Just a quick question about the knobs. I’ve replaced all of the knobs that were on pots. I am not familiar with the encoder hardware. I just wanted to check to see if it is ok and safe to pull off this knob as well.
Many thanks

The encoder is same knob / shaft, so you should be able to pull it off without issues.

Thanks for your reply.

@oweno while we’re on the mods topic, I’ve been thinking about opening mine up and putting little rubber washers over the wooden keys to dampen some of the wiggling and tighten up the response on both the Organelle and the Pocket Piano. Good idea or bad idea?

It is a good idea, but might be pretty difficult to execute (compared to changing knobs). Both instruments are tricky to take apart without everything falling all over the place (we use jigs to assemble them). Then you’d probably need a custom rubber part that is just the right size…

Have you guys ever considered doing something like that? (IMHO) I love the feel of the wooden keys but there’s a lot of action in them which can sometimes make it difficult to be precise when playing. It would also dampen the clacking sound a bit, which I don’t really mind, but if you’re recording from a room you can definitely hear it.

, did you ever mod your Organelle?? Just curious to know how difficult/tedious it was to open it up and then put it back together again (which is normally harder). I’m considering doing a couple of esthetic mods but don’t know if I’ll regret starting hahah.

No, I didn’t. After @oweno’s explanation of the innards, I decided it was best to leave it as is since I was looking at opening it up and would risk losing lots of little parts. I am considering replacing the knobs with classic knobs like @KJEA did above, since I think bigger knobs might give you a more fine tuned control (and I prefer the look.)

What did you have in mind for mods?

Yeaa that’s what I’m scared of too! And I can’t justify the trouble and possible damage I might cause for a simple visual mod. This might be blasphemy for some, but I really don’t like the teal color. I want to de-anodize it and leave the natural aluminum color, as well as dye the “black” keys on the wooden buttons with a darker shade of brown. Stupid, I know, as the color of gear used to make music shouldn’t matter. It really makes a difference to me though!! I might end up doing this down the line, some day when I get really bored haha.

First post here on this great forum, and an exciting piece of hardware. I managed to score a 2nd hand unit at a very reasonable price.

Question on custom knobs, looking at the coolercaps website are the shafts of the pots 0 degree?
Any help appreciated, as I am looking to add out some colours to aid in the differentiation of the individual operators functions OP-1 style.

@mec1 the ‘flat’ of the potentiometer shaft is 180° from the pointer:

Thanks for the photo and response Chris! thought it would be either 0° or 180°

if you do this, i’d love to see the finished result with colored knobs.

Can you link your knobs?

I did this btw - with oven cleaner. Worked very well!

Sorry to revive this thread, I’m wanting to put some knobs like what the organelle has on a few of my pedals. Any ideas what I would search to find that? Are the knobs just a silicone type material?

My new Organelle M came with dirty knobs, there was some white dust on them embedded in the rubber. So I changed them to plastic knobs I got with my Polyend Medusa:

To take the originals off safely, pull from both sides evenly and firmly straight up. They should come off without harming the pots. The most delicate one is the endless encoder, don’t push the new knob too hard when putting it on.

I’m wanting to put some knobs like what the organelle has on a few of my pedals. Any ideas what I would search to find that? Are the knobs just a silicone type material

The Organelle knobs are ‘soft touch’ style which means there is overmolded rubber on top of plastic.

Before ordering any for your pedals you should confirm the pot shaft diameter and if there is a ‘flat’ in shaft making a ‘D’ shape for the knob to fit over. If there is a flat, it will help to know the angle of the flat relative where the knob’s pointer is. (See the photo a few posts up).

Adafruit has some similar knobs to the Organelle.

For replacement knobs, these from modular addict look pretty similar to the originals (although maybe a rounder edge) 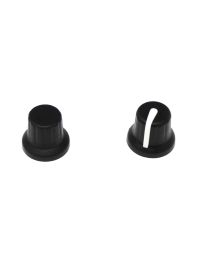