No, I put these files in the /root/scripts directory.

However, this is all outdated now that C+G released OS V3, which supports WiFi from the interface

EDIT: I see you already have OS3! – you should be good to go without this extra Linux wrangling. On the root of the USB stick, you should have a wifi.txt file (you can create one if not), and fill it with your NetworkSSID and Password on two seperate lines, like this:

Then from the Organelle interface, go into the WiFi Settings and see if you can connect.

Also one thing I did have issues with was connecting to a 5G WiFi network (I use the Raspberry Pi CanaKit adapter). If you have control over your router, try creating a 2G network.

EDIT: I see you already have OS3! – you should be good to go without this extra Linux wrangling. On the root of the USB stick, you should have a wifi.txt file (you can create one if not), and fill it with your NetworkSSID and Password on two seperate lines, like this:

Then from the Organelle interface, go into the WiFi Settings and see if you can connect.

Also one thing I did have issues with was connecting to a 5G WiFi network (I use the Raspberry Pi CanaKit adapter). If you have control over your router, try creating a 2G network.

yeah I was able to connect at the place where i have a studio space which is perfect. However: I wasn’t able to get Link going… that is the main reason for me checking out the wifi adapter… so this is where my question is now, with this stuff you posted:

Ah I see – Well, that wifi config stuff essentially accomplishes what OS v3 does now, back when we were on OS v2. If you do you want to muck with it, it requires plugging a monitor/keyboard/mouse into the Organelle and putting them in /root/scripts/. Keep in mind if you do this, it will likely break the way OS3 handles wifi connections, so I’d recommend not messing with it unless you know exactly what you’re doing.

Which patch are you trying out to test Link? I can give a go on my end.

Which patch are you trying out to test Link? I can give a go on my end.

i use a bunch of customized polybeats patches synced up with all my other gear, all synced up to Ableton Live. I’m fine using the USB to MIDI cables, but i was hoping to possibly sync up thru wifi. it’s really not that imperative i guess. I suppose in a live situation in a club or festival there probably won’t be wifi anyways but…

Gotcha. Yeah, WiFi at a gig is pretty risky. You could always plug in an Ethernet USB adapter to the Organelle, but that would require having a hub and an Ethernet cable to your Laptop, too. Messy, but reliable. You’d also have to enable the Ethernet adapter on the organelle which requires more mucking around in Linux.

Just for kicks, I’ll check out Polybeats and see if I can get Link working over WiFi with the new OS v3…

Link works fine over wifi, you can see how to integrate it with patches, by looking at pd-grids-link

@Bassick if you have it working on one wifi network and not the other, then id recommend looking at what the difference is between the networks, its likely to be something like security settings.

and yeah, i would not start messing with the wifi config files unless you know what your doing , as for OS 3.0 it works out of the box, but you jeopardise that by editing other files.
(note… there is an AP mode, that hopefully will be in 3.1)

Yup, just to confirm, LINK is working fine for me on wifi, too. Here’s the steps I took:

LINK is pretty sweet, I love that you can change tempo from whatever device you like – as opposed to MIDI, where you have a master/slave relationship.

It takes a bit of work, but you can get wired Ethernet working with Organelle, too. It just takes some Linux’ing and you have to enable eth1 with netctl and other networking commands. I’ve had success with the Apple USB Ethernet adapter. Should probably work with any USB class-compliant Ethernet adapter. This is much more reliable than wifi when playing a gig.

I purchased a CanaKit WiFi USB Raspberry Pi Wireless Dongle (802.11 n/g/b 150 Mbps) but I am experiencing problems connecting.
I created a wifi.txt file (in TextWrangler) on the root of the usb drive and typed in the name of the network on the first line, and the password on the second line.
Organelle on OS 3.0
After a 30 seconds ‘Connecting…’ message it shows ‘Problem Connecting’

What am I doing wrong ?

can you verify the WiFi network to which your a trying to connect is 2.4 GHz? 5GHz network will not work.

I believe the router is a dual band

I had a similar issue that was of an issue with wifi.txt encoding. Does the network name appear correctly in the wifi menu?

Hmmm actually it looks like on the Organelle screen there is a [space] - [space] before the name of the network.
Unless it is the way Organelle display it, you might be right on this
How do I avoid the afromented formatting?

I was missing the network name entirely, I think that ’ - ’ before the name is normal so it might not be that.
My formatting issue was due to creating the file in windows in DOS format I think.

Gotcha.This is what the wifi setting looks like on my organelle. 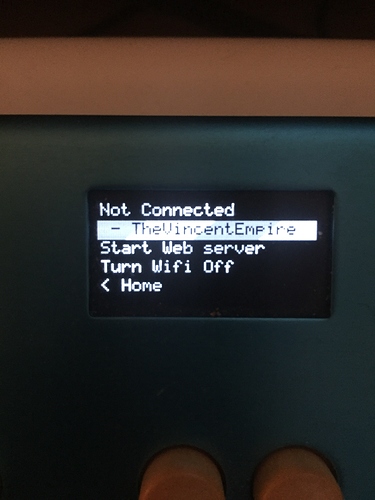 Hi there I cant get my WIFI dongle to work with my router. Does the text below tell me that my router is not viable? I have changed the WIFI log in text file with textedit and saved - the SSID shows on the Organelle screen but I get {problem connectingg} after 15-20 seconds. please help!

@Echopet What is your WiFi dongle? Chipset? Trying to connect to a 5G router? this will not work.
This is not interpreting the log file, sorry…

Yep, I guess I’ll just go for Amazon rather than the local shop and buy the Raspberry one…thanks!

I suppose it might be duff. I bought it off Amazon from a link post4d by someone on this forum! I forget who and when - I’ll have a look back and see if I can track it down!

Thanks for casting an eye over the file I’m not that good at understanding network jargon !

What is your WiFi dongle? Chipset?

Hi!
Im trying to connect my organelle to an existing ethernet network i have at home, where computers share ableton link signals over ethernet, which is more reliable that over wifi.
Any chance on how to get the organelle talking to ethernet? I have one of those apple ethernet - usb converters.
Thanks!